Betsy DeVos doesn't know the value of the Special Olympics 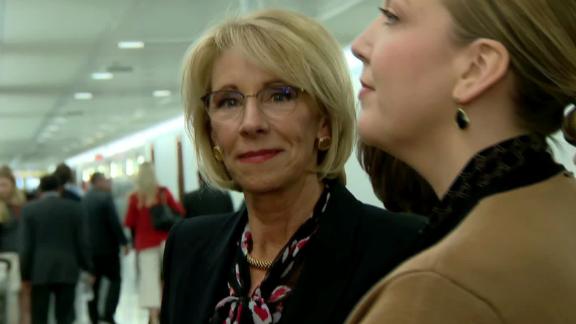 Education Secretary Betsy DeVos is in the hot seat over the Trump administration's plan to cut $18 million in funding for the Special Olympics. CNN's Ryan Nobles caught up with DeVos after a Senate budget hearing.

Upon reading the news that Education Secretary Betsy DeVos proposed cutting funding to the Special Olympics, I was angry -- but not surprised.

DeVos argued that with funding from philanthropic donors, the organization does not need financial backing from the government. But it was her dismissal of the importance of programs that support special needs children that exposed the value, or lack thereof, that she places in organizations such as the Special Olympics.

"We are not doing our children any favors when we borrow from their future in order to invest in systems and policies that are not yielding better results," DeVos said. Even assuming the best intentions, this comment shows an obvious misunderstanding of the societal benefits of programs that support individuals with special needs.

Now I'm not the most objective person when it comes to this topic. I am a parent of an intellectually disabled freshman in high school named Sam. He was not supposed to make it very long after birth and even if he did he was not expected to be able to do much of anything physically or mentally. But he has defied the odds and is a happy, active teenager.

Sam still can't do everything that a typical 15-year-old should be able to do. Every morning, my wife and I dress him, tie his sneakers and help him brush his teeth; at night we shower him and read to him as he cannot read on his own. Much of Sam's life will require this type of help among other forms of assistance with basic life skills, let alone the more complex. However, there is one area where Sam is relatively independent and that is athletics. He can run, throw, hit, kick, catch and shoot almost any type of ball. When Sam is participating in athletic activities, he feels real self-esteem by fairly and independently competing in something his peers typically enjoy.

The Special Olympics represents just one avenue for the disabled to apply their athletic skills. There are countless other such programs from the grassroots level on up that afford similar exposure for the intellectually disabled. These programs benefit the Sams of the world by showing them increased respect and inclusion, which they rarely get from other sources. But perhaps more importantly, counter to DeVos' statement are the benefits of these programs to society as a whole. I have seen firsthand how volunteers are forever changed for the better after working with the Special Olympics participants.

They walk away from the experience with a new appreciation for inclusion, empathy and tolerance. And these experiences carry over into their daily lives, allowing them to see people with intellectual disabilities as a little less disabled and a little more like themselves. This perspective will make for a more inclusive and thoughtful cohort of future business leaders, parents, teachers, coaches and politicians who will shape our societal culture for generations to come. If DeVos realized the impact of the Special Olympics, she would know that the future is only made brighter through its continued governmental support.

Most people such as Sam will never be able to vote, organize a protest march, call their congressperson or advocate for themselves in any other way, so they are truly dependent on the understanding and tolerance of others to fight for the brightness of their futures. The best we can do on behalf of those without a true voice is to advocate on their behalf.

If we need inspiration to do so, we need only look to the Special Olympics athlete's motto: "Let me win, but if I cannot win, let me be brave in the attempt."