Greenland's most critical glacier is suddenly gaining ice, but that might not be a good thing 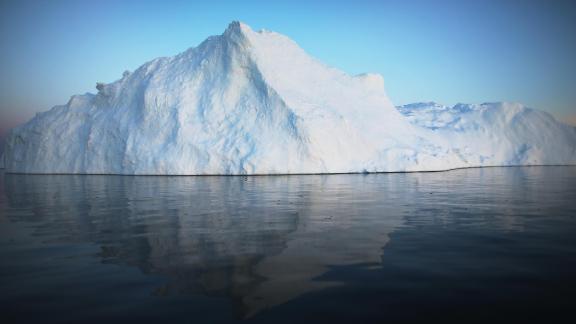 The cold water flowing into the Jakobshavn glacier has caused it to grow about 100 feet.

Greenland's largest and most critical glacier, Jakobshavn, is gaining ice, according to NASA researchers.

Although this finding is surprising and temporarily good news for the glacier, limiting its contribution to sea level rise, the reason for the ice accumulation might spell disaster in the long run.

For two decades, Jakobshavn sustained remarkably consistent thinning that scientists thought would continue, if not accelerate, due to large-scale warming of the polar atmosphere and oceans -- but that rate dramatically slowed in 2014, and the glacier actually thickened between 2016 and 2017 and again between 2017 and 2018, according to a study published Monday in the journal Nature.

"At first we didn't believe it," said Ala Khazendar, the lead NASA scientist on the study. "We had pretty much assumed that Jakobshavn would just keep going on as it had over the last 20 years."

Jakobshavn Isbrae, the full name of the glacier along Western Greenland's coast, has been Greenland's fastest-flowing and largest ice-losing glacier over the past 20 years, making it by far the single largest contributor to sea level rise on the large, mostly frozen island.

In fact, according to Khazendar, the melting from that single glacier alone contributed to global oceans rising an average of 1 millimeter between 2000 and 2010.

And even though Jakobshavn has gained ice at lowest levels where it enters the sea, it has still been contributing to sea level rise because the rate it is melting into the ocean is still greater than the rate that ice is accumulating higher up on the glacier, according to the researchers.

The glacier controls a basin with enough ice, that if melted fully, would raise global oceans by about 2 feet.

It is this threat, and the rapid speed with which Jakobshavn had been shredding ice over the past several decades, that has led droves of scientists to the icy coastline and makes the glacier one of, if not the most, studied glaciers in the world.

Khazendar, along with a team of other scientists at NASA's Jet Propulsion Laboratory, used a number of datasets from NASA that analyze Greenland's ice, oceans and atmosphere, including those from recent targeted research missions called Oceans Melting Greenland and Operation Ice Bridge, to determine the likely cause of Jakobshavn's recent about-face.

Between 2014 and 2016, waters up to 2 degrees Celsius (3.6 degrees Fahrenheit) cooler entered Disko Bay, where Jakobshavn glacier enters the water.

Researchers believe that the cooling is related to a natural variation in the climate in the Northern Hemisphere known as the North Atlantic Oscillation, which can warm or cool the northern portions of the Atlantic Ocean in periods of several years (not too dissimilar from the impact that El Niño and La Niña can have on Pacific Ocean temperatures).

Through detailed observations, Khazendar and team were able to track this cooler water from the open North Atlantic all the way to Disko Bay and found that the timing matched the glacier's switch towards gaining ice perfectly.

"In the last two or three years, the ocean's role was dominant," Khazendar said.

But in the late 1990s, it was much warmer water that entered the bay that melted the ice shelf that had been protecting Jakobshavn glacier, setting off the unparalleled melting that characterized the glacier for the next two decades.

"It is like an experiment 20 years in the making," Khazendar said.

He said the glacier's dramatic response to variations in ocean temperature is forcing scientists to reevaluate how sensitive glaciers are to slight changes in the ocean's climate.

A reprieve, not a resurrection

The cooling of the Northern Atlantic is a blip on the radar, a localized effect that will eventually turn warmer as the North Atlantic Oscillation flips back. This will take place at the same time as climate change turns up the thermostat on earth's oceans.

"This is a reprieve," Khazendar said of the recent thickening of Jakobshavn glacier, "not a resurrection."

Scientists caution not to read too much into the news of one the most critical glaciers in the world suddenly, and unexpectedly, gaining ice.

"The response of a single glacier does not imply that things have shifted," said Marco Tedesco, a research professor with Columbia University's Lamont-Doherty Earth Observatory.

"Greenland is currently [losing] about 270 gigatons (a gigaton is a billion tons) of ice per year...its mass loss has been accelerating over the past decades, with Greenland being the single largest contributor to sea level rise," Tedesco, who was not involved in the new research, wrote in an email.

Eric Rignot, a glaciologist at the University of California, Irvine and senior research scientist at JPL, noted that "The chances that this will keep going on are very low in my opinion. It is only a matter of time before the glacier starts thinning again -- maybe this summer, maybe next year."

Presidential tweets on climate change notwithstanding, a few cold days in one part of the world does not negate an overall warming trend of the entire planet. We "should not confuse climate with local variability," said Rignot, who was not involved in the research. "The latter is what we are seeing here."

The findings show that glaciers are extremely vulnerable to temperatures, both hot and cold, and that is not good news for the future.

Most of the heat from global warming is going straight into the oceans -- studies show more than 90% -- and that is resulting in global ocean heat levels that are climbing higher every year.

"Next time the warm waters come back to Jakobshavn, they will be even warmer," Khazendar said.