Mueller investigation was no 'witch hunt' 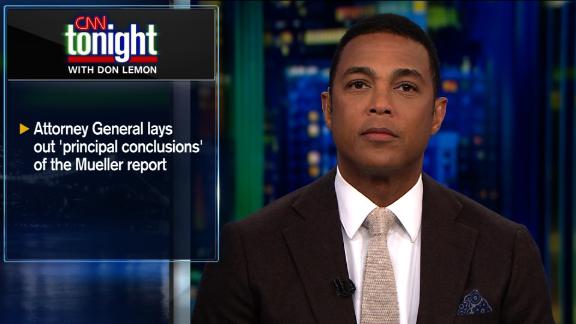 CNN's Don Lemon breaks down Attorney General William Barr's summary of the Mueller report and states that the public needs to see the full report.

Now the report is in. A four-page summary has been released by Attorney General William Barr. Suddenly, the independence and integrity of Robert Mueller seems self-evident. He's being lauded by some Republicans while some Democrats are left feeling frustrated. We still need to see his full report. But despite all the unhinged attacks, the process appears to have moved ahead beyond partisan politics.

The president is vindicated on the question of Russian collusion. The special counsel "did not establish that members of the Trump campaign conspired or coordinated with the Russian government in its election inference activities." This is good news for our country.

The report does not backtrack on the fact that Russia did attempt to influence our elections, as the intelligence communities have long said and as the President repeatedly denied. Barr's letter does not begin to explain why so many members of the Trump orbit lied about contacts with the Russians or why the President is so reluctant to criticize Vladimir Putin. The role of Wikileaks or other third parties -- as indicted by the indictment of Roger Stone -- will still need to be seen when and if the full report is released.

On the question of obstruction, this is far less of a vindication for Team Trump. The attorney general quoted the special counsel's report saying that "while this report does not conclude that the president committed a crime, it also does not exonerate him." Note that this is in direct conflict with the President and the White House's insistence after the topline results of the report were released that it represented a complete "exoneration."

It explicitly is not that. Instead, the special counsel essentially punted the question of obstruction of justice to the Justice Department. We'll need to see the full report to get a sense of what evidence led Mueller to say there may or may not have been obstruction. It's more than a little odd and might have been a very different conclusion if the independent counsel statute had not been allowed to expire.

But Mueller reports to the Trump justice department and Attorney General Barr and Rod Rosenstein seem to have quickly decided that it is not worth prosecuting, consistent with Barr's 19-page memo dismissing obstruction claims before he became AG. This is an especially impactful decision, because we know that obstruction of justice is an impeachable offense from Republicans who applied that standard to Bill Clinton.

For all the attacks on the Mueller investigation's duration and expense, we can now see that it was relatively brisk and efficient compared to previous presidential investigations.

The Mueller investigation lasted 22 months and cost some $25 million, resulting in criminal charges being brought against 30 defendants including six Trump associates.

By comparison, the Watergate investigation lasted four years and cost $26 million. It led to the imprisonment of senior Nixon aides and the resignation of the president.

The Reagan era Iran Contra investigation lasted seven years and cost $75 million resulting in indictments of senior administration aides and the conclusion that it could find no evidence that President Reagan had broken the law but found evidence that Reagan had "knowingly participated or at least acquiesced' in covering up the scandal.

And Ken Starr's Whitewater investigation lasted five years and cost $40 million producing a 300-page public report resulting in the impeachment of President Clinton for lying and obstruction of justice about an affair.

So let's put to bed the idea that the Mueller investigation was a waste of time and money. The questions it investigated could not be more serious to our sovereignty and national security.

Given what we know now, cheerleaders for impeachment will find their wishes frustrated. Independent voices have been saying we need to see what the Mueller report said on collusion with Russia. Now we know. No one should be an impeachment enthusiast. Impeachment is a political, not a legal, process but it would be tremendously destructive for the country and only polarize us further. That seems off the table. That's a good thing for the country.

But while the question of collusion should now be considered clear, there are still some 17 other investigations and cases ongoing, including the Southern District of New York.

House Democrats will continue to follow the money between and look into questions of whether the Trump organization was laundering money for Russian oligarchs. We don't know yet whether the Mueller report looked into this or referred the matter to a different jurisdiction.

House Democrats may also seek to subpoena additional background information and testimony. Over the weekend, Doug Collins, ranking Republican on House Judiciary, argued that "it's not the Department of Justice's job" to turn over info to Congress to inform investigations. But back in the Obama administration, House Republicans successfully sued to get the Department of Justice to hand over documents after they ignored a congressional subpoena.

The biggest question will be when and if the full Mueller report will be released to Congress and the American people. Given that the White House is claiming complete vindication, there should be no partisan resistance to releasing the report. Attorney General Barr says that is his intention absent restrictions about grand juries and national security. But there's no reason to believe that anything will go smoothly where our polarized politics are involved.

Unfortunately, but not unexpectedly, President Trump's initial comments indicated no appreciation for the impartiality of the Mueller investigation. He called it an "illegal takedown that failed" -- and seemed to indicate that there may be pardons coming for some of his convicted aides.

Make no mistake, the Mueller investigation was the opposite of illegal. It was a triumph for the rule of law under extreme partisan pressure, especially from the President. And if anything we may find that Mueller's hands were tied because of his commitment to the letter of the law and the special counsel statutes.

But in the President's vindictive rather than vindicated response to the four-page summary, there is every sign that our civic stress test will continue. But despite all the political assaults, the rule of law proceeded on its own. To clear up the remaining questions -- and possibly to offer additional vindication for the President -- we will need to hope that the vote of 420 members of the House of Representatives to release the full report is respected. The American people deserve no less.