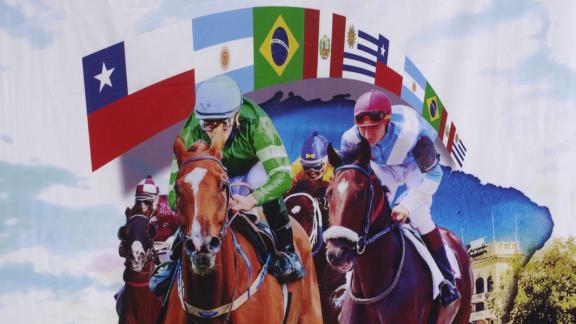 The Gran Premio Latinoamericano is Latin America's top race and its most unique - it changes its rules depending on its location, which changes yearly.

Celebrating the very best thoroughbred racehorses in South America, the Gran Premio Latinoamericano is the most prestigious date on the continent's racing calendar.

The race, also known at the Longines Latin American Grand Prix, was first run in Uruguay in 1981 and, much like the Breeders' Cup in the USA, is held at a different location every year.

A constantly changing venue allows the race to stay fresh, with the distance and surface varying every year.

The stunning Club Hipico de Santiago, Chile, played host to the latest edition of the spectacle, in a country steeped in racing history. The 150-year-old venue was designed in a European style and shares a striking resemblance to the iconic Longchamp Racecourse in Paris.

When the thoroughbreds fly out of the stalls to the cry of an impassioned crowd, it's not just the $500,000 prize purse up for grabs, though. National pride is also a huge part of South America's richest horse race.

READ: A day in the life of Paul Nicholls' racing yard

Entrants represent their countries in the Latinoamericano -- much like in the Olympic Games.

This year's race featured participants from four visiting countries -- Peru, Brazil, Uruguay and Argentina -- who are all looking to challenge their Chilean hosts for the prize.

Brazil is the most successful country in the race's 35-year history, with 10 winners, but the Chilean horses had a unique advantage at the Club Hipico de Santiago.

"We run clockwise, all other race tracks in South America run counterclockwise. It's an advantage for certain, the times we host the Latino, we only have victories from Chilean horses," racecourse manager Oscar Vargas told CNN Winning Post.

It's a pattern which once again repeated itself in 2019, with favorite Ya Primo winning Chile its ninth victory.

It was winning trainer Guillermo Aguirre's first victory in the race, a feat which left him visibly emotional.

"It's such a great feeling, to be up there with the other horses amongst such great talent. I lost my wife four months ago and I'm quite sure she's helping me from the sky," he told CNN's Winning Post.

Watch the video at the top of the page to see CNN Winning Post's guide to the prestigious Gran Premio Latinoamericano.

US carries out the 1st federal execution in nearly 2 decades; Honken execution scheduled for Friday

First COVID-19 vaccine tested in US poised for final testing