Beto O'Rourke is a risk Democrats might want to take 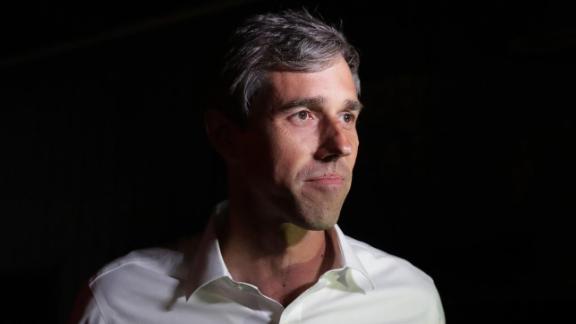 Beto O'Rourke shot into the national spotlight during his grassroots Senate race in Texas, but who was he before all the hype?

As Beto O'Rourke enters the crowded field of Democrats running for president, the party's voters face a key question: Should they opt for the "safe choice" -- the candidate with the most experience, the most moderate positions and the one least likely to ruffle feathers by advocating controversial stances -- or opt for someone such as the former congressman from Texas who might be perceived as riskier.

After all, the 46-year-old O'Rourke lost his race to defeat Ted Cruz for Senate, only served three terms in Congress and has an unconventional campaign style.

Is it safer to go for centrists such as Amy Klobuchar or long-tenured politicians such as Joe Biden? The stakes feel enormous to most Democrats so they want to make sure they make the right decision. Defeating President Donald Trump is the top priority for every Democrat, above any internal tensions over policy that might exist.

This creates nerves about many of the other nominees, including O'Rourke, Sens. Elizabeth Warren and Bernie Sanders, and even to some extent Sen. Kamala Harris.

It might be that the "safe" candidate is not the smartest political choice. Any American voter over 40 has lived through a series of consequential presidential elections where the Democrats' safe choice went down to defeat.

Vice President Al Gore seemed like he had a pretty good chance at the White House in the 2000 election. The 1990s ended with a booming economy, the federal deficit literally vanishing and peace overseas. The good times were rolling for many middle-class voters.

While the Republican House had voted to impeach President Bill Clinton, a fierce political backlash took shape against the GOP. Voters registered soaring approval ratings for Clinton despite the scandal, while Republicans ended the decade in the doghouse.

Gore brought a great deal to the table. He had extensive experience in office and had a remarkable command of the intricacies of public policy. He had been involved in a number of key issues, such as the internet, long before they were on the national radar. He also had been senator and vice president, which gave him a fair amount of savvy about the dynamics of party politics.

Yet George W. Bush won the election. To be sure, his victory came only after a divisive and controversial recount battle that ended in a Supreme Court decision effectively giving Bush Florida's electoral votes. Ralph Nader's third-party candidacy also took key votes away from the Democratic ticket.

Nonetheless, thanks to the Supreme Court ruling that essentially awarded Bush a majority in the Electoral College, Gore was defeated. For all his experience, he was unable to deliver margins that were large enough in Florida to avoid the need for a recount.

Many Democrats felt the election shouldn't have even been close to begin with given the wind that was behind Gore's campaign. Nor was the team that Gore assembled in the recount battle as skilled as Bush's in the final stage.

Bush served two terms because the next "safe" candidate, Sen. John Kerry, lost in 2004. Many Democrats felt that Bush was extremely vulnerable. By 2004, the President was struggling to maintain his popularity as the war in Iraq was turning out to be an operational disaster, on top of the fact it had been based on spurious claims of Saddam Hussein possessing weapons of mass destruction. Democrats were energized to defeat a President who had slashed taxes, deregulated the economy and opposed gay rights, in addition to launching an unjustified war and botching the victory over Iraq.

Like Gore, Kerry was an impressive politician. He defeated a number of primary opponents including the unorthodox Howard Dean, had served in the military, had a long record on Capitol Hill and had exceptional knowledge of foreign policy. The senator played it safe at the Democratic National Convention by boasting of his military service through a famous salute rather than talking about his work protesting the Vietnam War. Kerry also had been in the trenches of politics for enough time to understand how to avoid the traditional pitfalls of campaigns.

Yet in another close election, Kerry lost. The safe candidate didn't have what was needed to win. The Republican campaign machine twisted and turned his record so badly that many voters had trouble seeing Kerry as anything other than a war-resisting Democrat who would say whatever it took to win. The Republicans took his virtues, such as his willingness to engage in the complexities of issues, and turned them into weaknesses.

Bush used wedge issues such as same-sex marriage to make certain turnout was robust. He wrapped himself in the American flag, touting the way his administration helped to restore normalcy after 9/11. The result was four more years of Republican policies.

And most recently, Hillary Clinton went down to defeat against Trump in 2016. Once again, Democrats picked the candidate who seemed as if she was cast by Hollywood to be the safe choice. After a close call with Sanders' electrifying underdog challenge, Clinton took to the campaign trail in 2016 with immense confidence. After all, she had worked on the Watergate committee staff, served as a senator from New York and been secretary of state in addition to her eight years as first lady.

Nor was she inexperienced with hardball partisan politics. She had seen the wrath of congressional Republicans when they continually attacked her and her husband in the 1990s. She had come under political fire while secretary of state from the congressional Republicans and the conservative media, particularly over Benghazi. And then there was her experience in the 2008 primary when a little-known Democratic newcomer from the Senate, Barack Obama, turned her world upside down by defeating her.

In 2016, Clinton did win the popular vote, and some believe Trump's victory was aided by Russia's disinformation campaign. But as in 2000, there are many Democrats who feel the election shouldn't have even been close given the state of the economy, Obama's popularity and the kind of opponent she faced.

Which brings us to the other reason that Democrats might want to think twice about the "safe choice" argument. The political candidate who had the most success in the 21st century was the one least likely to succeed.

In 2008, Obama had barely any experience in elected office when he ran for president. He was unknown to much of the public except for those who remembered his powerful speech at the Democratic National Convention in 2004. His biggest virtue was that he had spoken out against the war in Iraq, unlike so many of the "safer" establishment Democrats. He had taken a risky political position when it was not popular, and voters rewarded him for it. (Since Obama wasn't in the Senate until after the war started, he didn't have to cast a vote on the Iraq War.)

He would be the first African-American in the country's history to win the presidency, something that still seemed impossible to many voters. He was depending on a coalition of younger, women and immigrant voters who were not traditionally the party's muscle in elections.

While the economic collapse of 2008 and Bush's unpopularity provided him with tremendous advantages over Sen. John McCain, just as important was Obama's ability to organize, motivate and inspire voters. They believed he would offer a new era in politics and not simply a better option than the status quo.

Obama also had a mastery of the election process, from his ability to navigate the frenzied 24-hour cable and internet media environment to his understanding that local organizing and social networking still mattered. Unlike Gore, Kerry and Clinton, he got to sit behind the desk in the Oval Office -- and went on to win re-election.

To be sure, just because the safe choice didn't work in 2000, 2004 and 2016 doesn't mean that it couldn't be the ticket to success today. It is true that a candidate such as Biden or Klobuchar might have the best shot at winning back voters in states such as Pennsylvania, Wisconsin and Michigan that were crucial to Trump's 2016 victory.

But the best bet is anything but clear-cut. Democrats should not assume one candidate has a better chance than the other because he or she is the most conventional or risk-averse.

Even the Democrats who are driving through the safe lane would do well to remember the recent past. Biden and others should beware of the Kerry trap of always looking for the safest, poll-tested positions on every issue.

Recent election history should be part of the conversation that Democrats have in the coming months. It might be that the candidate best suited to bringing an end to Trumpism is the person who is drawing the large crowds causing voters to dream of a country that is better than this, and the person who will know how to fight hard in the crazy and unpredictable political-media landscape we now inhabit.