'The carpet was pulled from under me': Dafydd James on fighting depression 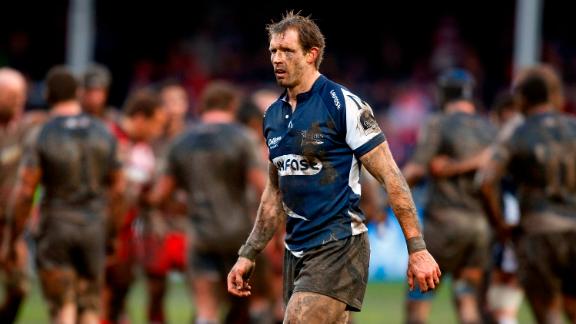 Dafydd James is a former Wales rugby star and opens up about his struggles transitioning to life post-rugby and the mental health issues he is battling.

Even as he sits down for an interview and begins to look back on his 15-year playing career, Dafydd James admits that he's troubled by anxiety.

"I'm not in the best of places," the former Wales international tells CNN Sport. "I struggle to take a deep breath and look back. I'm probably my own worst enemy."

It has been nine years since James last played a game of professional rugby, a period of time that's taken him down the dark tunnel of depression and mental ill-health without managing to emerge out the other side.

Retiring from sport has hit James hard -- far harder than any of the knocks and bumps he endured as a player. Injury forced him to step away from the adrenaline-fueled highs of rugby in 2010, and the intervening years spent trying to adjust to normal life have felt anything but normal.

"It's a fantastic life but unfortunately you do become a little bit institutionalized by it. I certainly did and you get carried away with the moment really," says the 43-year-old who scored 16 tries in 48 appearances for Wales.

"I don't think you'll ever get that same sort of environment, the same buzz. As I said, I struggle with it. I've not been settled. I've been horrendous to live with, probably, as people will find you're not getting that buzz, your drive, your focus."

READ: Wales close in on grand slam with win over Scotland

The buzz, drive, and focus that James speaks of reached its peak in 2001 when he scored for the British & Irish Lions in their 13-29 victory over Australia. He played for a host of clubs across England and Wales, and his 29 tries in the top flight of European rugby is a record bettered only by three players.

Dogged by injuries in the final stages of his career, James had started to put plans in place for life after rugby. Having completed a number of courses and diplomas in sports science and nutrition, he initially planned to become a strength and conditioning coach with a professional sports outfit.

But at the age of 34, the end came about quicker than he had anticipated.

"One injury cropped up and the carpet was pulled from under me," says James.

"I was supposed to continue playing, my contract was for a couple of years more but everything changed. Just one injury and yeah, it was a difficult pathway to go down. In all honesty, I haven't recovered since."

According to UK mental health charity Mind, one in four people in the Britain experience a mental health problem each year, and one in six do on a weekly basis. A report in 2016 found that one in five people in England had had suicidal thoughts, self-harmed, or attempted to take their own life.

Meanwhile, a study by the Rugby Players Association (RPA), England's player representative body, revealed last year that 62% of retired rugby players have suffered from mental health issues, close to half of whom had played at international level.

It was while filming with the BBC for a documentary on adapting to life after professional sport that James first publicly discussed his battle with depression.

He has spoken with fellow rugby star Jonny Wilkinson, who played alongside him during the 2001 Lions tour, about their shared struggle to come to terms with retirement from professional sport, and also with former England cricketer Simon Jones, who had a career beset by injuries.

James commends the work the RPA -- who reached out to him offering help -- and says he could never have foreseen the support he's received from the wider public.

READ: The secrets to fueling a rugby team

"I've been blessed. I've done exactly what millions would like to do and what only a few get the opportunity to do. I'm privileged and if I could be a role model for anybody -- to help anybody -- then that would be a legacy I'd like to go forward with."

James says he has "lots of regrets" when he looks back on his playing career, but qualifies by adding that he's "too cynical and critical of myself."

Self-appreciation has been hard to come by for James, but for that he has his two young boys to turn to.

"I know my two sons, Aled and Gruffydd, they adore me," he says.