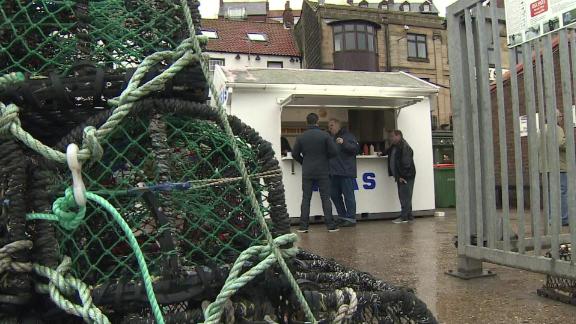 On England's northeast coast, Whitby is a proud fishing town that doesn't do a lot of fishing anymore. It's a common view here: blaming EU-imposed fishing quotas for almost wiping out Whitby's fleet. It's why so many voted for Brexit, and they want it to happen as soon as possible. CNN's Phil Black reports.

The winds out on the North Sea are too strong for Whitby's fishermen to go anywhere.

Instead, on this steely, gray morning, they get together in a boisterous group at the catering hut by the harbor. The tea is strong. The laughs are big. The talk can be direct -- especially when the subject is Brexit.

"Can't lead. She's made a total mess of things from the start."

These men spend most of their working days at sea, but they're seriously informed about all things Brexit. They said, it's personal.

"I have my son aboard my boat as well as my brother," Cole said. "And I would like to see a future in the fishing industry for them."

Richard Brewer, 62, is another lifelong Whitby fisherman who works a boat with his two sons. He said he's watched every key parliamentary vote.

"We hope that through this we can take back control of our own waters and our destiny."

Whitby's fishermen are single-issue Brexit supporters. All they want is to escape the European Union's Common Fisheries Policy. They blame those regulations for low quotas that drive boats out of business. And they're bitter about the access that European fishermen have to British waters.

"We must have control of other vessels that come into our areas," Brewer said. "And that's one of the cornerstones I hope May does continue fighting for."

The Prime Minister has promised her Brexit plan would free UK fishermen from the CFP. For that reason alone, many of the skippers of Whitby's fleet were happy to back her deal. But Cole said no one is surprised Parliament rejected it a second time.

"It's as expected. The government (is) clueless and should show some balls and push for no deal ASAP," he said.

Whitby is a beautiful town, even when the sky is low and gray. It's bisected by a long, narrow harbor, with homes, shops, hotels and pubs built on the slopes that rise steeply on either side. The dramatic ruins of Whitby Abbey dominate the view to the south. A statue of the town's most famous resident, explorer Capt. James Cook, looks over the harbor from the north side.

That combination of history, beauty and charm mean tourism is a big earner here, especially in summer. So not everyone agrees with the fishermen about Brexit being good for the town.

Both are seething and incredulous that it's come to this: Brexit (for the moment) still imminent and the government without an approved plan.

"I think it's disgraceful and everyone should be sacked," Collinson said. "It's a complete mess. It's poorly executed, never going to come to a happy conclusion. We're being led by a bunch of idiots."

Hartley is a retiree who's worried about what all this disorganization will mean for younger generations.

"It's inevitable whether it's last night's vote, tonight's vote, tomorrow's vote, it's the same politics; they're not concerned about us," he said. "How can we be a fortnight away and we don't know what's going to happen?"

You smell Fortune's Kippers minutes before you find it on a narrow-cobbled road. (Kippers are smoked herring -- and Brits eat them for breakfast.)

Inside the smoker, Barry Brown is hanging up row after row of herring just as his great-great grandfather did when he started the business in 1872.

Brown's response to the Brexit mess, given recent political experience, is touchingly optimistic. He wants Parliament to come together behind the Prime Minister for the good of the country.

"Let's get it out of the way. And get on with things," he said. "Get positive. The politicians get together and work together a bit and let's push on forward. I think we can do it."