What the judges got wrong on the Manafort cases 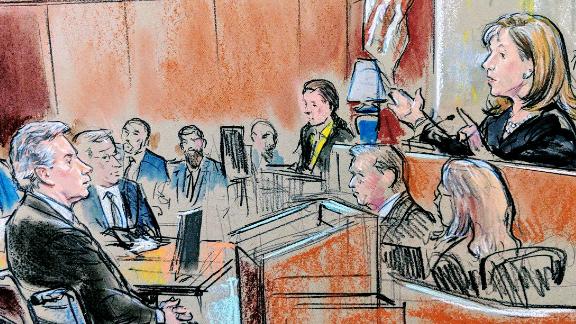 Ask any judge to name the hardest part of his or her job and almost always the response will be "sentencing." As a prosecutor, I did hundreds of sentencings and I understand the challenge: a judge must combine technical determinations of law with decidedly unscientific human judgment about the essential nature of the person being sentenced.

While there is no inherently correct sentence in any given case, Paul Manafort's federal sentences ultimately fail to do justice. Manafort received inexplicable and undeserved leniency that defendants who are not rich, white and powerful rarely, if ever, get.

Let's start with the bottom line. If Manafort had been sentenced even to the very bottom of the sentencing guidelines -- which are designed to ensure equal justice between similarly-situated defendants, and which judges must consider but are not bound to follow -- he would have been sentenced to 19 years in the Eastern District of Virginia and 10 years in Washington, DC. Even if those sentences ran concurrently (at the same time), Manafort would have gotten 19 years. Even if you think 19 years would be excessive for Manafort -- and I do -- he will likely be out of federal prison as early as 2024. I've seen many low-level, non-violent drug offenders receive more time behind bars.

How did this happen? First, in Virginia, Judge T.S. Ellis somehow concluded that Manafort had lived an "otherwise blameless life." Sure, "blameless" -- once you get past the millions of dollars Manafort stole from the US government over many years through sophisticated tax fraud; the string of lies to the IRS, banks, prosecutors, the FBI, Congress and his own lawyers; the efforts to obstruct justice by tampering with witnesses; and the failure to express significant remorse or apologize even at his own sentencing. But otherwise, like Judge Ellis said, "blameless."

This week, Judge Amy Berman Jackson used more pointed rhetoric when sentencing Manafort but still pulled up short. Jackson added only 43 months -- less than four years -- onto Manafort's sentence, despite a guideline range even higher than the 10-year statutory maximum. After Judge Jackson previously revoked Manafort's bail for attempting to tamper with witnesses, and then found that Manafort intentionally lied to special counsel Robert Mueller's team, it seemed she firmly understood the gravity of Manafort's continuing efforts to obstruct justice. Alas, that translated into only an incremental sentencing increase.

Just minutes after Manafort's last federal sentencing, the New York County District Attorney announced a spate of new state-level charges against Manafort. District Attorney Cyrus Vance made a baldly political move, unbefitting a neutral prosecutor. Given the timing of the announcement and the apparent redundant nature of the charges (some of which already were litigated in the Virginia federal case), Vance appears to be using his prosecutorial power to pile on for political purposes. These new charges, nonetheless, could subject Manafort to more time (though, as discussed below, the charges ultimately may not stick). While I believe Manafort ideally should spend more time behind bars, this is not the right way to do it.

The bottom line is that Manafort now will serve five-plus more years behind bars (as explained in the first reader question below), plus whatever results from the new state charges. That's significant. And it remains a monumental development that the President's former campaign chair has been convicted of a spate of serious federal felonies. But, ultimately, given what the federal sentence could and should have been: Manafort skated.

Jay, Virginia: Is there parole in the federal system? For example, will Manafort serve his entire sentence?

"Parole" -- early release of a prisoner -- is available in most state criminal justice systems, enabling offenders to be released from prison before (often well before) completing their sentences.

In the federal system, however, there is no parole. When a federal defendant gets sentenced, he will serve nearly all of that time. The federal system does enable defendants who serve more than one year in prison to earn up to 54 days of "good-time" credit for every year served, assuming a clean disciplinary record in prison. This amounts to approximately 15% off the total sentence.

So, let's do the math on Manafort. He now has been sentenced to a total of 90 months in prison (47 months in the Eastern District of Virginia plus 43 months consecutive in Washington DC). Assuming he earns the 15% "good-time" reduction, he will serve approximately 77 of those 90 months.

Inmates also receive credit for time served before trial or conviction. Manafort violated bail and was thrown in jail in June 2018, so he will receive credit for the approximately nine months he has served in prison already. Subtracting those nine months, Manafort will likely serve 68 more months behind bars and be released in about November 2024. Unless, of course...

Linda, Maryland: Now that Manafort has been sentenced to do time, will Trump pardon him, and what will be the political ramifications?

I do not think Trump will pardon Manafort -- at least not before the 2020 election -- because a pardon carries political cost, but no real benefit.

Trump personally gains little or nothing from a Manafort pardon. While a pardon could undermine or eliminate a person's incentive to cooperate -- why try to get a lower sentence by cooperating when you can get off scot-free through a pardon? -- no prosecutor would offer Manafort cooperation now, after he got caught lying to Mueller (and the IRS and the FBI and the grand jury -- and pretty much everybody else he has dealt with). So Manafort no longer poses any threat to Trump, with or without a pardon. (Though Trump may see some value in sending a message to others not to cooperate with investigators.)

On the other hand, a pardon likely would cost Trump politically. The public inherently dislikes pardons (your reader questions bear testament to that). And can't you just see an opposition ad showing Manafort with his $15,000 ostrich jacket handing secret internal polling data to a Russian intelligence operative, with the voiceover saying "Donald Trump pardoned THIS man"? Tough image, politically.

But the political calculation changes on November 4, 2020. With Election Day in the rearview, Trump -- win or lose -- has less to fear from public backlash over a pardon. So, while I do not expect a pardon before Election Day, I certainly can see Trump letting Manafort off the hook after the polling stations close.

And there's a new wrinkle: the New York County DA's new state-level charges are an obvious effort to protect against a pardon (because the President cannot pardon a state charge). However, the New York state charges appear to overlap with some of the federal charges for which Manafort already has been prosecuted, so Manafort could have a legitimate double jeopardy argument in the state court. Essentially, Manafort could argue, "I've already been prosecuted for these crimes in federal court, so I cannot be charged with them a second time in the state court."

Kerry, Texas: Are there procedures to review and/or remove judicial appointees?

There are only three ways for a federal judge to leave the bench: death, retirement or impeachment.

Impeachment of federal judges is exceedingly rare. The House of Representatives has impeached only 15 federal judges since 1803, and only eight have resulted in conviction in the Senate and removal from the bench. The most recent happened in 2010 when the House impeached and the Senate convicted Judge Thomas Porteous for accepting kickbacks and lying to the Senate and FBI. Historically, under the Constitution, federal judges have been impeached because of misconduct and not because of their judicial rulings. So, although Judge Ellis angered many with his especially lenient sentence of Manafort, don't count on him being removed from office because of it.

Jon, Indiana: Even if pardoned, does Roger Stone still have to testify under oath in Court if he is subpoenaed?

If Stone (or any person) receives a presidential pardon, he still can be subpoenaed. If anything, the pardon would make it more difficult for Stone to resist a subpoena because, having been pardoned, he no longer faces federal prosecution for the pardoned acts, which means he cannot refuse to answer based on the Fifth Amendment right against self-incrimination.

But two big caveats attach. First, the scope of the pardon matters. A president can pardon a person either generally or for specific acts. So, for example, if Stone received a pardon only for lying to Congress about his contacts with Wikileaks, then he still could invoke the Fifth Amendment when questioned about other topics. Second, a president can pardon only for federal crimes. So even if Stone received an all-encompassing general pardon, he still could take the Fifth to protect against exposing himself to future state-level criminal charges.

Charles, Nevada: In connection with defendants like Michael Cohen or Stone, evidence was gathered through unannounced raids -- surely for the purpose of preventing destruction or concealment of evidence. But, since no surprise factor exists in the event of a subpoena, what if anything assures the American people that evidence won't be destroyed, concealed or altered?

It is more difficult for prosecutors to obtain a search warrant (which requires showing probable cause to a judge) than to issue a subpoena (which simply requires a good faith belief by the prosecutor that the subpoena might lead to discovery of relevant evidence).

Law enforcement agents execute search warrants without any advance warning, as in the Cohen and Stone cases, which limits the subject's ability to destroy evidence (though I had one search warrant where a particularly dedicated FBI agent scooped out wet documents that a subject had tried to flush down the toilet).

Jay, Texas: Can a sitting president be indicted if he broke the law to get the presidency?

Former Acting US Solicitor General Neal Katyal, who helped draft the special counsel regulations under which Mueller operates, has stated that Department of Justice policy against indicting a sitting president does not apply "to a situation like this, in which the crime that is being alleged is one that allowed someone to get the presidency in the first place; they do not necessarily apply to crimes that go to obtaining presidency itself." And David Kelley, former US Attorney for the Southern District of New York (disclosure: Kelley hired me to work there) has said that DOJ "policies can be bent, policies can be broken." Kelley also said that he would have considered indictment as an option on the table.

Still, don't expect the Southern District to buck the longstanding Justice Department policy or to reason around it. But understand: we actually do not know whether a sitting president can be indicted. The idea that a sitting president cannot be indicted is not stated in the Constitution, statute or judicial decision. DOJ policy could change someday -- DOJ changes its policies regularly on various topics -- and if so, then we could get a definitive answer from the courts.

Three questions to watch next week

1. Will more people be implicated in the stunning federal prosecution of a college admissions cheating and bribery ring?

2. Will House Oversight Committee Chairman Rep. Elijah Cummings refer Cohen to DOJ for potential perjury charges over his statements about a presidential pardon?

City admin on Mason City downtown project: 'I think this is a great reuse of this space'

Sex offender charged with murder in death of Iowa girl, 10

6 people, including 4 kids under the age of 4, hospitalized in Olmsted Co. crash

The John Marshall softball team is all about family

The Century boys' lacrosse team is ready for action