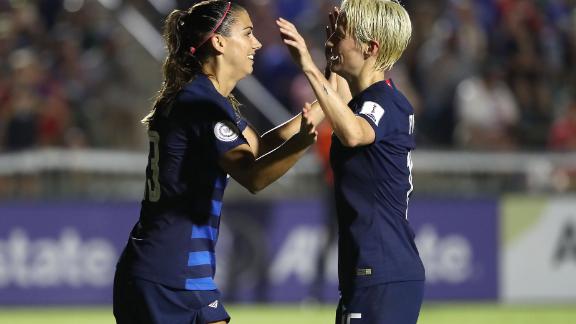 The Unites States' women's soccer team will "fight until the end" in its battle for equality, says one of the team's stars Megan Rapinoe.

The US women's national soccer team will "fight until the end" in its battle for equality, says one of the team's co-captains Megan Rapinoe.

With the Women's World Cup just months away, 28 players in the US squad last week filed a federal class-action lawsuit against the United States Soccer Federation, stating "institutionalized gender discrimination," which the reigning world champions say has existed for years.

The suit, filed in a federal court in Los Angeles on March 8 -- International Women's Day -- intensified the team's long-running dispute with the federation over pay equity and working conditions, stating that "female players have been consistently paid less money than their male counterparts."

Rapinoe, a World Cup winner in 2015, told CNN Sport she was confident the team would be successful, adding that the USWNT was happy to "clear the path as much as we can" for other countries in the fight for gender equality.

"To even bring about a lawsuit to the forefront you better be sure as hell that your claims are solid," said the 33-year-old Rapinoe, who was speaking in Paris at the launch of the USWNT's World Cup kit.

"I've been on this team a long time and we're extremely organized and united and feel that this is the right time for it and that we have a very strong case. We feel good about it.

"For us, it's just another step forward. It's obviously not something we're going to drop ever. We're going to fight to the very end and this was just the next step that we needed to take."

The dominant power in the women's game, the USWNT is the world's top-ranked team and favorites to win this summer's Women's World Cup in France, which would bring about a fourth title in eight tournaments. The country's men, by comparison, are currently 25th in the world rankings and failed to qualify for the 2018 World Cup in Russia.

US Soccer has yet to comment on the legal action which also seeks compensation for any player who has appeared for the US since February 2015.

Rapinoe was one of five high-profile players who filed a complained with the Equal Employment Opportunity Commission (EEOC) in 2016 alleging wage discrimination. The men's national team, the athletes said, unjustly earned far more than they did.

The players and their federation eventually agreed a settlement in 2017. Though the terms of the deal, which runs through to 2021, were not released, it reportedly included increases in base pay and match bonuses, better per diem allowances, enhanced travel benefits and increased financial support for players who are pregnant.

However, the US women soccer players argue that they still receive less pay from their employers even though they are required to play more games than the men's team and win more matches.

Frustrated by a lack of progress on their wage discrimination complaint, the EEOC granted the players a right-to-sue letter.

"We tried to go through the EEOC process and tried to get the federation to come to the table, not really in negotiation but in mediation," said Rapinoe. "They were not really into doing that.

"At this time, this is the best step we can take to put us in the strongest position to continue this fight."

The first white professional athlete to kneel during the US national anthem in support of Colin Kaepernick, Rapinoe said the team did not make the decision lightly with the World Cup on the horizon.

"It's not something that we were willing to give up or just let float out into the ether," the Californian said.

"We felt as well that it's far enough out that we can manage the distraction now and be done with that and fully focus on the World Cup, and obviously with litigation it takes a million years to do anything in the court [so] it's not as if anything is happening very quickly.

"No one understands better than us the power and the importance of winning and pushing the needle forward so this team has always had distractions of some kind.

"We're used to this and we have a very experienced veteran group that can guide the younger players and by the time the World Cup comes around it's not something we're going to be talking about every day."

Rapinoe added that the USWNT stars were also motivated by the feeling that they weren't just fighting for themselves.

"We have a very visceral understanding of our place within the bigger fight. We feel any time we win, other teams win as well and other players can really piggyback off the success. We're happy to be the ones out charging in front and try to clear the path as much as we can for anyone else."

Alex Morgan, a World Cup winner and Olympic gold medalist, said achieving equal pay would be as great as anything she has achieved on the pitch.

"I had a dream to play soccer and to make it at the highest level, but when I'm retired and older what I'll look back on is the legacy that I'll leave and feeling proud of the mark that I've made on the sport," Morgan, who along with Rapinoe filed the 2016 complaint against US Soccer, told CNN Sport.

"At some point we need to take a stand and realize that we do deserve true equality.

"Once we all made the decision together it was a really easy one because it's the right thing to do, it's the next step forward."

Hi: 75° Lo: 50°
Feels Like: 68°
More Weather
Lingering showers Thursday AM will turn to sunshine by the afternoon

Gov. Walz on those outraged about George Floyd's death: 'I not only see you, I hear you. I stand with you'