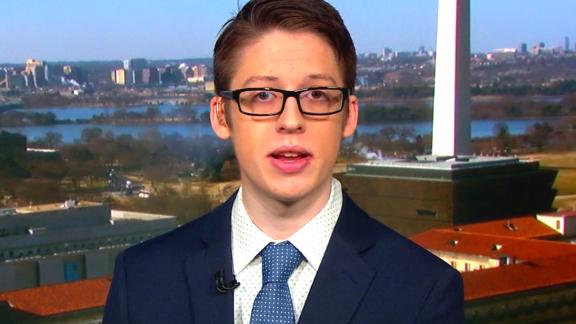 In an interview with CNN's Poppy Harlow and Jim Sciutto, Ethan Lindenberger, the teen who defied his parents and got vaccinated at 18 years old, discusses what he plans to say when he testifies before Congress about the dangers of being unvaccinated.

Just a week after a congressional hearing on the significant rise of measles cases in the United States, lawmakers met to discuss outbreaks of preventable diseases that seem to be sweeping the nation.

The US Senate Committee on Health, Education, Labor and Pensions held a hearing Tuesday called "Vaccines Save Lives: What is Driving Preventable Disease Outbreaks?"

The hearing drew attention before it even began as 18-year-old Ethan Lindenberger, who defied his mother's wishes for him to not get vaccinated, planned to testify before the Senate committee.

"To combat preventable-disease outbreaks, information is, in my mind, the forefront of this matter. My mother would turn to anti-vaccine groups online and on social media, looking for her evidence in defense rather than health officials and other credible sources. This may seem to be in malice because of the dangers of not vaccinating imposes, but this is not the case. My mother came in the sense of loving her children and being concerned," Lindenberger told lawmakers Tuesday.

"For certain individuals and organizations that spread misinformation, they instill fear into the public for their own gain selfishly and do so knowing that their information is incorrect. For my mother, her love, affection and care as a parent, was used to push an agenda to create a false distress, and these sources which spread misinformation should be the primary concern of the American people," he said. "Approaching this issue with the concern of education and addressing misinformation properly can cause change, as it did for me."

A call for change

"I grew up in an [anti-vaccination] household. My mom didn't believe that vaccines were beneficial to the health and safety of society and believes that they cause autism, brain damage and other complications. This has been largely debunked by the scientific community," Lindenberger said in a YouTube video on Saturday.

When he turned 18 a few months ago, Lindenberger began getting vaccinated, and he is finally caught up on all his shots.

Vaccine effectiveness was a big topic of interest at the hearing, as well as concerns about the spread of medically inaccurate information online relating to vaccines. Also at issue: whether addressing that misinformation might be a way to stop outbreaks of vaccine-preventable diseases before they start.

Public health experts at the hearing called for more to be done to address the rise in measles cases across the country.

Wiesman said during the hearing that "sustained, predictable and increased federal funding" is needed for public health efforts to prevent outbreaks. He called for an increase to the Centers for Disease Control and Prevention's budget and increased funding for immunization programs that involve sharing immunization information with parents and maintaining electronic immunization systems.

"We are constantly reacting to crises rather than working to prevent them," Wiesman said.

Also, "we need federal leadership for a national vaccination campaign spearheaded by CDC in partnership with states that counter the anti-vaccine messages, similar to the successful Truth tobacco prevention campaign. We have lost much ground; urgent action is necessary," he said.

Yet not everyone agreed fully with some of the ideas put forth in the hearing, such as mandatory vaccine requirements.

Some members of the audience erupted into applause when Kentucky Sen. Rand Paul questioned whether such requirements should be part of the discussion.

"Given the choice, I do believe that the benefits of most vaccines vastly outweigh the risks, yet it is wrong to say that there are no risks to vaccines," Paul said.

In the hearing, Paul mentioned the national vaccine injury compensation program, which addresses the rare risk of having a serious reaction to a vaccine.

"I'm not here to say 'don't vaccinate your kids.' If this hearing is for persuasion, I'm all for the persuasion. I vaccinated myself. I vaccinated my kids," he said. "But I still do not favor giving up on liberty for a false sense of security."

Later in the hearing, Louisiana Sen. Bill Cassidy responded to Paul and referenced how there are some vaccine requirements in place, such as in hospitals.

"If the nurse's aide is not immunized, she can be a Typhoid Mary, if you will, bringing disease to many who are immunocompromised," Cassidy said, adding that in a school setting, requirements may be in place to protect the health of students, including those who might have weakened immune systems and therefore can not get immunized.

"Now, if you believe in liberty, that's fine, don't get immunized, but I don't think you need to necessarily expose others to disease," he said.

John Boyle, president and CEO of the nonprofit Immune Deficiency Foundation, said at the hearing that "the current decline in vaccine usage is literally bringing back plagues of the past. While those of us who are immunocompromised will suffer first and suffer more, the loss of community immunity is a threat to all of us."

Herd immunity or "community immunity" refers to how an infectious disease can be kept from easily spreading through a community based on having a sufficient proportion of people in that community who are immune to the disease, such as through vaccination.

When it comes to the measles, mumps and rubella vaccine, the CDC has long confirmed that it is safe and effective. Additional evidence supporting the safety of the vaccine was published in the journal Annals of Internal Medicine on Tuesday.

The study provided evidence strongly supporting that the MMR vaccination does not increase the risk for autism, does not trigger autism in susceptible children and is not associated with clustering of autism cases after vaccination.

"I want to speak directly to the parents who have children with serious health issues and who have been attending our hearings in Washington state and are watching this hearing today," health secretary Wiesman said at the hearing.

"I see your pain and your desire for answers to your children's health issues. Your mission to protect and promote the health of your children is one we share. While the science is clear that vaccines do not cause autism, we do need to better understand its causes. We need to develop together -- affected families, scientists and public health officials -- research agendas, to get the answers we need," he said.

All in all, "vaccines are safe, effective and the best protection we have against serious preventable diseases like measles," Wiesman said.

At last week's hearing, held by the House Committee on Energy and Commerce, Dr. Nancy Messonnier, director of the National Center for Immunization and Respiratory Diseases at the CDC, said, "I do believe that parents' concerns about vaccines leads to undervaccination, and most of the cases that we're seeing are in unvaccinated communities."

"However, there are pockets of people who are vaccine-hesitant. ... Outbreaks of measles occur when measles gets into these communities of unvaccinated people," she said. "The only way to protect against measles is to get vaccinated."