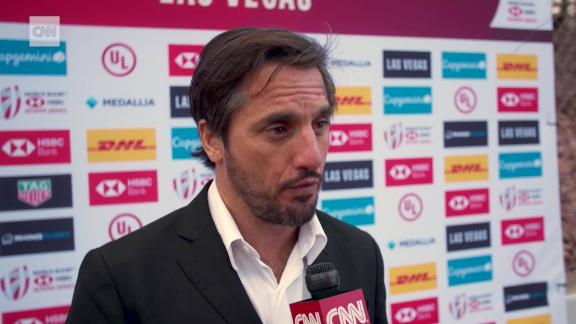 World Rugby vice-chairman Agustin Pichot says he would quit his position if the likes of Fiji and Samoa are excluded from a new global competition.

Radical plans to reshape rugby's international calendar have caused shockwaves through the sport, but World Rugby vice-chairman Agustin Pichot has quelled fears that certain teams -- specifically Fiji and Samoa -- will be excluded from the new league.

Reports last week suggested a 12-team, ring-fenced World League was set to be established in 2020, with the likes of USA, Japan, and Italy -- ranked 11th, 13th, and 15th in the world respectively -- included at the expense of the Pacific Island nations.

But Pichot, a former Argentina captain who retired from rugby a decade ago, has said he is advocating promotion and relegation between two international leagues.

"The first meeting we had was in Fiji when we started our process. I could not see that Fiji or the Pacific Islands [will be omitted]. Ask Romania, ask Georgia -- I spoke with Georgia and Romania in the last three days, the same with Brazil and Uruguay. They are my close friends. The same with Canada.

"You cannot leave everyone out of that big picture. If we're looking at the big picture they have to be consulted the same as the players."

Last week, the Pacific Rugby Welfare group, which possesses a 600-strong membership including many professional players, said a boycott of this year's Rugby World Cup could be discussed as a "legitimate player protest" of World Rugby's alleged plans.

Reports said that a 12-team league comprising New Zealand, Australia, South Africa, Argentina, France, England, Wales, Ireland, Scotland, Italy, USA and Japan was set to get under way in 2020, with all teams agreeing to the concept. That would mean ninth-ranked Fiji, 12th-ranked Georgia, Tonga (14th) and Samoa (16th) would miss out.

But Pichot, who was elected World Rugby vice-chairman in 2015, says initial plans have been miscommunicated.

"Confusion is the right word," he says. "There have been discussions, obviously, of who will participate. But mainly the concept is 12, plus 12. Who are those 12 in each of the bands is the question that is being resolved. It hasn't been resolved and that's where the confusion came.

"Basically the most important thing is there's a pathway ... whoever is there has to be merit based and has to have a pathway. If you're in the bottom 12 to go up and be part of the top 12 like in every sport has to be by merit and playing promotion and relegation. That's my view, that's most of the countries' views but other people think differently."

READ: World Rugby criticized for 'out of touch' calendar shake-up

World Rugby chairman Bill Beaumont released a statement Sunday saying he is arranging a further meeting in Dublin this month to "consider the way forward for an annual international competition."

"Contrary to reports, no decisions have been made," said Beaumont. "This is an ongoing and complex process with multiple stakeholders, some with differing views.

"Only by working together in the interests of the global game can we achieve something truly impactful in this important area for rugby's future global growth."

Pichot said the main opposition to promotion and relegation is coming from individual nations.

"I don't know what nations specifically. What I can tell you is that it's self-preservation," said Pichot.

"They look at emerging nations in 10 years' time and carrying on [to grow] because of the sizes of the countries [...] That sometimes gives other teams a bit of a self-preservation attitude. Again, that's politics and that's something that has to be resolved by World Rugby."

As well as the threats from Pacific Island nations to quit the World Cup, issues have been raised over the physical and mental strain the new league would place on players -- a debate that has been led by the players themselves.

"Fans want to see meaningful games, they don't want to see fatigued players playing a reduced quality of rugby as part of a money-driven, weakened competition that doesn't work for the players or clubs," said New Zealand captain Kieran Read, a member of the International Rugby Players Council (IRP).

World Rugby released a statement last week responding to such claims made via the IRP, saying that "commitment to player welfare matters is unwavering and we will continue to engage and give full consideration to the welfare of players within the ongoing discussions."