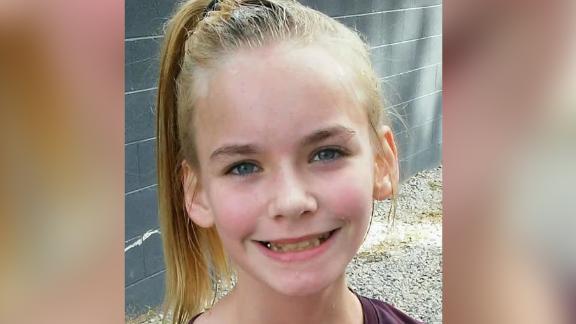 11-year-old Amberly Barnett, who had gone missing, has been found dead, according to DeKalb County police.

Amberly Barnett was last seen Friday around 6 p.m. in the Mount Vernon community in northeast Alabama, and searchers found her body about 6:30 a.m. the next day, the sheriff's office said. The location wasn't disclosed.

The sheriff did not release the cause of her death or any other information because of the ongoing investigation.

"I can tell you we are diligently, diligently pursuing different avenues, and Lord willing, we will have answers in the upcoming days," Weldon, who declined to take questions from reporters, said at a brief press conference.

The girl's mother, Jonie L. Barnett, said on Facebook that Amberly went missing from her aunt's home while the aunt was at the store and the aunt's brother-in-law worked on a nearby house, the Facebook page said.

Amberly left her phone behind, which was unusual because "my baby takes it everywhere," she said.

"Nothing in her phone indicated she was planning to leave!," Jonie Barnett said on Facebook.

A green SUV was seen leaving the driveway, the mother said on Facebook.

She said in a telephone interview that she had little information.

"We don't know anything," she said Sunday. "They are doing the autopsy. We will get the results tomorrow."

The search began immediately after the call came in to the sheriff's office at 7 p.m. Friday, and continued throughout the night, growing in manpower and spreading to nearby Cherokee County and into Georgia, the sheriff said at an earlier press conference.

The Alabama Department of Forensic Sciences and DeKalb County investigators responded to the search, he said.

A Mount Vernon resident told CNN affiliate WAAY31 that crime of this kind rarely, if ever, happens in the area, which is about 25 miles northeast of the city of Gadsden, Alabama.

"It was shocking. You don't hear nothing about that around here," Terry Clanton told WAAY31, describing Mount Vernon as a close-knit community.

"I want to say directly from the heart, being in this career, in this job, the way we do it is 100% from the heart," Welden said. "And my heart is shattered this day, here in DeKalb County, Alabama."

Eager to act, Biden and Democrats leave Republicans behind

Creating an 'IT ecosystem' in North Iowa