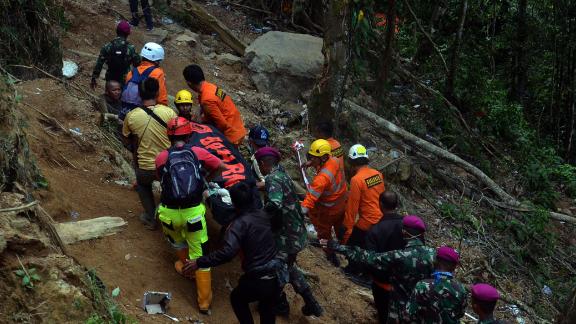 Hopes for the survival of about three dozen miners trapped in a collapsed illegal gold mine in Indonesia have severely diminished as oxygen levels at the site fall.

Hopes for the survival of about three dozen miners trapped in a collapsed illegal gold mine in Indonesia have severely diminished as oxygen levels at the site fall.

"There is no hope for survivors. (It's assumed all have) passed away," said Feri Arianto, of the Public Relations of the National Search and Rescue Agency (Basarnas).

The rescue mission will not attempt to add oxygen into the tunnels, in the Bolaang Mongondow area on the island of Sulawesi, which collapsed after a landslide on Tuesday.

Eight miners had died and 27 had been rescued from the site, as of 12 p.m. Friday local time (12 a.m. ET), according to Arianto. One man had been rescued alive and died on the way to hospital, he added.

Arianto explained that it was hard to confirm exactly how many people remained in the mine as many of the men were not locals.

"We don't know for sure how many left are still buried because witnesses said (the miners) don't know well each other, and most of them come from outside the regency," he said.

Earlier in the rescue mission, dozens of trapped miners could be heard "screaming for help," disaster management agency officials said.

But it had been hard to reach all those trapped as rescuers had been hampered by unstable ground disturbed by the landslide, Arianto said.

"If the rescuers take the rocks out, they're worried that it will (cause) another landslide -- the rocks (on the surface) are quite big and supporting the soil underneath it," he added.

On Thursday, some relatives of the miners had joined the search and rescue mission, but officials blocked their efforts Friday on safety grounds.

"We forbid the families to join search and rescue for today because the road to the location is very steep, with a slope of 80 degrees, and we want to use heavy equipment," he said.

"Local people are forbidden to enter the mining location. It is too dangerous. We don't want any more victims."

Agus Budianto, landslide mitigation head at the Volcanology and Geological Disaster Mitigation Center, said the landslide had been caused by the opening of the illegal mine.

Locals operating small-scale illegal mines in the area use traditional techniques to dig their shafts, and do not conduct any kind of feasibility study before starting work.

Budianto said the struts supporting the shaft entrance had broken under pressure from the soil above.

"This is not a landslide disaster but it is caused by human activity itself," he said.

Man who went missing in northeast Iowa is found

StormTeam 3: From cold to heavy snow with travel hazards

Police: Man stole vehicle in Mason City, hid it behind a business

StormTeam 3: The latest on the winter storm

A shot at making history