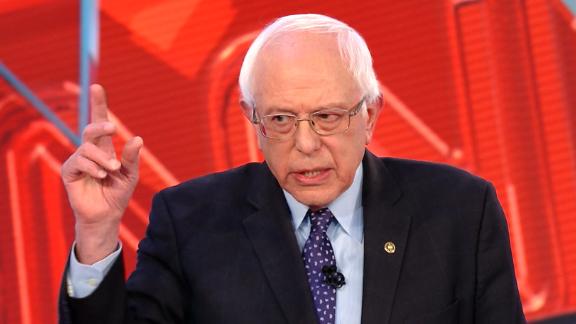 During a CNN town hall, presidential candidate Bernie Sanders explains the programs he'd like to implement if he were elected president, which have been criticized by President Trump as akin to socialism.

The CNN town hall with Bernie Sanders on Monday night showed the Vermont senator picking up where he left off in 2016: Calling for higher taxes on the wealthy, single-payer health care and a dramatic expansion of government support for programs including pre-kindergarten and university education.

If much of what Sanders said sounded familiar, it's because many policies that sounded radical and new in 2016 have become mainstream Democratic positions. It's not that Bernie went centrist; instead, the center moved toward him. That is how the Vermont senator raised $10 million in the week after announcing his candidacy for the 2020 nomination, and it's why he polls near the front of the pack of contenders running for the Democratic nomination.

So the town hall sounded like a walk through the standard Democratic talking points, which isn't particularly exciting. Sanders promised to do something about the millions who struggle in poverty. He vowed to slap new taxes on "the billionaire class" to cover the cost of relief for the poor.

The pharmaceutical industry is "the most greedy entity in this country today," he said, with it raking in $50 billion in profits last year while one in five Americans can't afford vital medicines like insulin. (Sanders called for laws to allow Medicare to negotiate lower prices with pharmaceutical companies).

Thanks to Sanders' attention to these issues in 2016, now all Democratic candidates must promise to tackle income inequality, the high cost of health care and the stranglehold that monied interests hold over Congress. But that leads to a potential problem for Sanders: other candidates, like Sens. Elizabeth Warren, Kamala Harris and Cory Booker can present an identical analysis while offering more sizzle and pizzazz than Sanders can muster with his professorial style.

At the town hall, his proposals went over well with the Washington, DC, audience. The assembled group included a cross-section of core Democratic voters: women, blacks, university-age young adults. Some of the questions reflected audience skepticism about whether the Sanders message can bring people together and coalesce into a force powerful enough to unseat President Trump.

The doubts reflect the reality that following Sanders' progressive message doesn't guarantee victory. Many of the progressive candidates he supported in the 2018 midterms went down to defeat, and Our Revolution, Sanders' political arm, failed to flip any seats in the midterms from Republican to Democrat.

That will be Sanders' toughest case to make. At a time when Democrats want to beat Trump more than anything, Sanders has to persuade the rank-and-file that he is the best salesman of a product now being copied by many others.