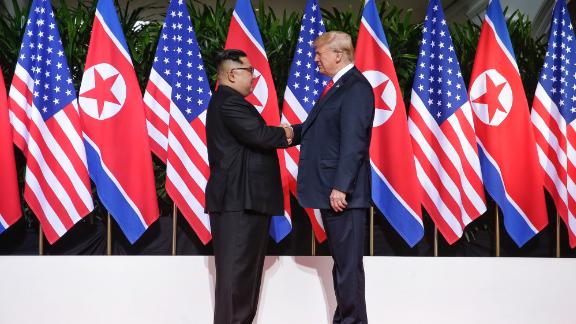 Arguably no group is more surprised by the rapidly changing image of North Korean leader Kim Jong Un than the 30,000 people who successfully escaped his country for a new life in the south.

As Kim prepares for his second summit with US President Donald Trump, these defectors provide a unique insight into life in Pyongyang.

What do they think of Kim's standing in the world? Has their view of him been affected by recent events? And will he agree to denuclearization for the sake of economic benefits?

Quotes have been slightly edited for clarity and condensed

What about human rights?

Everything is ridiculous. What's happening here is Kim Jong Un and his younger sister became like top celebrities in this country (South Korea).

I mean these are dictators. So people seem to have forgot about what he's done to his own people.

And the big problem is ever since he (Kim) visited Panmunjom (the Joint Security Area between North and South Korea) nobody wants to talk about human rights. It's so absurd.

Human rights vocabulary had disappeared long ago after the new government. But it seems even in the US, it is kind of disappearing.

When President Trump met us, it was last year.

What I'm really concerned about is in the last few months ... the issue of a nuclear weapons list is slightly disappearing from the American's agenda. President Trump is only talking about the stop of nuclear provocations by Kim Jong Un or the stopping of any nuclear missile launches.

I think if Trump goes on that kind of partial nuclear disarmament process instead of denuclearization process, there is no hope for South Korea or America to reach the final denuclearization of North Korea. I'd like to advise President Trump to stay on denuclearization.

If he fails in nuclear disarmament process with Kim Jong Un and agrees to something like partially destroying North Korea's nuclear capability while allowing North Korea to keep its capability to attack with nuclear weapons, then I think North Korea would be easily accepted as a nuclear state in this region.

What about the economy?

North Korea ambitiously declared that it'll develop the economy, but the system of monopoly which the country owns and controls everything will not be able to bring economic development.

We learned the lesson from Russia and China when they opened their labor markets and lifted travel bans, the economic development was realized.

It's the same for Mongolia. When it reformed and opened the market, people voluntarily went abroad and sent money back home to their families.

North Korea sends out labor workers abroad but the regime takes about 80% of the income. The regime cannot efficiently allocate the money as government officials are corrupt. If regular North Koreans can keep more money, most of it will end up helping the domestic economy.

As far as I know, North Koreans are getting everything they need from the jangmadang (local markets in North Korea).

The markets are dominating the North Korean economy but there is no system that protects assets of these players. Their property can be seized any time for any reasons by the regime. Even though the markets are run based on the demand and supply, it is still functions at the individual level.

For example, a person who prints out calendars gets orders and sells them, but production of those calendars in government-owned factories is not decided by demand.

That is why I don't think Kim Jong Un's economic policy cannot succeed without opening its labor market and conducting reform measures.

Iowa teacher accused of secretly recording 2 females at his home