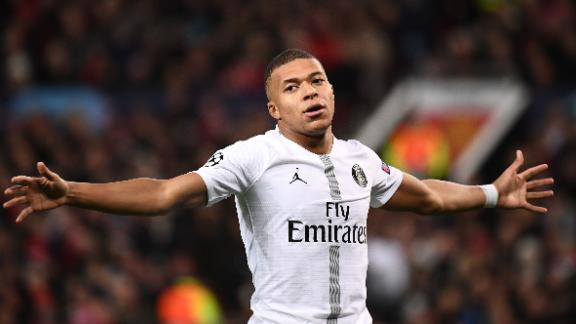 Former Arsenal manager Arsène Wenger has joined the growing list of Mbappé admirers, telling CNN, "When I saw Mbappé for the first time I said - it's Pelé"

When Kylian Mbappe scored France's final goal last July's 4-2 victory over Croatia, he became only the second teenager in history to score in a World Cup final.

The man he emulated was Brazil great Pele, who scored twice as an 18-year-old when Brazil beat Sweden 5-2 in the 1958 final and who is, to this day, the only player to have won three World Cups.

Mbappe was lavished with praise from all over the world for his performances in Russia, most notably for his scintillating match-winning display which knocked Lionel Messi's Argentina out of the competition.

Pele himself said recently he believes the France forward can "become the new Pele" and former Arsenal manager Arsene Wenger believes the comparisons are justified.

READ: The boy from Bondy who never forgot his birthplace

"When I saw him the first time in the first period, I said: 'It's Pele,'" Wenger told CNN. "He has a combination of pace, intelligence, relaxed attitude to deal with stress. You cannot give that to people.

"It looks like all the ingredients are there. Now for him, it's how much does he continue to improve and how much can he keep a rigorous attitude to think: 'Okay, where do I go from there.'

"When a guy is a world champion at 20 years of age, has won championships -- two or three already -- what can you say? And the numbers don't lie. He's an exceptional football player and France is gifted to have him."

The 20-year-old has now contributed to 73 goals in 73 games for Paris Saint-Germain and added to his burgeoning reputation with a goal in the comprehensive defeat of Manchester United in the first leg of the last-16 Champions League tie between the two European giants.

In the absence of the injured Neymar, the world's most expensive footballer, Mbappe came to the fore at Old Trafford, causing many to ask whether the Frenchman is now the Paris club's figurehead.

Asked whether Mbappe deserves to be mentioned alongside Messi, Cristiano Ronaldo and Neymar as one of the world's best players, Monaco midfielder Cesc Fabregas told CNN: "I would have to analyze it well but he'll be up there. He'll be up there because he's scoring match winners all the time for PSG."

Fabregas -- who is behind only Ryan Giggs for all-time English Premier League assists -- spent much of his career putting goals on a plate for the likes of Thierry Henry, Messi and Fernando Torres.

Mbappe's quality has left the Spaniard wondering would could have been had their paths crossed over the course of his illustrious career.

"He's got this electric pace," Fabregas gushes. "He's the type of player that I just would have loved to have played with. You know, the Thierry Henrys, players like this. All these fast players that go well behind the defenders. I think I could have a lot of fun playing with them."

'I will work again'

Since ending his love affair with Arsenal at the end of last season following 22 years at the club, Wenger has been out of work and has filled his time appearing as a pundit on various TV channels.

He recently admitted he still has the "football virus." He has been linked with Real Madrid and PSG, but the 69-year-old says he does not know what the future will hold.

"Yes, I will work again," he told CNN at the Laureus Awards, where he was presented with the Lifetime Achievement Award. "In what capacity, I don't know.

"At the moment I haven't decided that but I want to share my knowledge in some way. Where and with whom, I don't know at the moment because with whom it is important for me. Where, as well.

"But I still haven't lost my passion. I would even say my passion is very strong for my sport and that's why I want to continue."