Trump in 'very good health overall' but obese, according to physical exam results 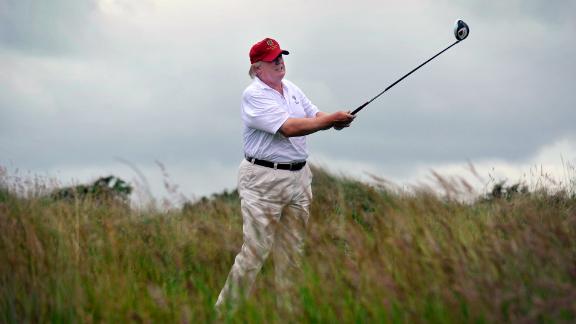 President Donald Trump, 72, is in "very good health overall," according to results from his physical examination, which were released on Thursday.

Trump underwent a physical examination at the Walter Reed military hospital on Friday, performed and supervised by Dr. Sean Conley, physician to the President.

At his physical exam last year, the 6-foot-3-inch Trump weighed 239 pounds, according to his doctor. Trump, who has a common form of heart disease, embarked on a mission last year to lose some weight.

Now, the President weighs 243 pounds, an increase of 4 pounds, according to the physical examination results. That weight now puts Trump's body mass index, or BMI, at 30.4, which makes him clinically obese.

Body mass index is based on height and weight, and a BMI of 30 or greater is considered obese, according to the National Institutes of Health.

"While BMI is not a perfect assessment of one's health, when someone is clinically obese and has other risk factors, that significantly raises the concern for having heart problems," said CNN's chief medical correspondent, Dr. Sanjay Gupta.

The examination took "approximately four hours" and did not require any sedation or anesthesia, Conley said. Trump was seen by 11 different specialists while at Walter Reed.

In general, presidents aren't obligated to release any results from their examination.

Last year, then-physician Rear Adm. Ronny Jackson said the President was in "excellent health" and even joked that Trump "might live to be 200 years old" if he made improvements to his diet.

Last year's examination results revealed that, in addition to heart disease, Trump has high cholesterol for which he already had been taking a low-dose statin.

Jackson recommended then for Trump to lose 10 to 15 pounds through diet and exercise, though sources told CNN that a year later, Trump has made only minor changes to his diet and exercise regimen. In other words, Trump has not followed doctor's orders completely.

People familiar with the President's eating habits say his meals still include regular helpings of red meat and fried potatoes. Some fish has been introduced into his diet, including dover sole, but he has not started a regular exercise regimen, according to people familiar with his habits.

"The President received a diet and exercise plan last year after his annual physical, but the President admits he has not followed it religiously," said Hogan Gidley, the principal deputy White House press secretary.

Trump's medical history includes rosacea, and he received a perfect score on a cognitive exam, which Jackson said last year he performed at the President's request.

"I've got to know him pretty well. And I had absolutely no concerns about his cognitive ability or his, you know, his neurological function," Jackson told reporters at the time.

After last year's physical, Jackson was nominated to become Secretary of Veterans Affairs, but later withdrew amid accusations of fostering a hostile workplace and dispensing medications without prescriptions. (He denied those allegations.)

Jackson returned to the White House Medical Unit, but was replaced by Conley as the President's main physician.

Earlier this month, Trump tapped Jackson to become his chief medical adviser, which the White House said would include advising on health care policy.