The dubious characters who surround Trump 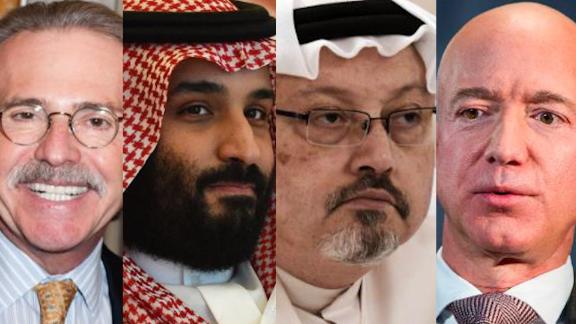 The Trump administration's clumsy efforts to protect Saudi Arabia's Crown Prince Mohammed bin Salman, known as MBS, after the death of Washington Post columnist Jamal Khashoggi highlight yet another instance of the bizarre nature of the people in the President's orbit.

Trump on Friday refused to meet a deadline set by the Senate Foreign Relations Committee to identify Khashoggi's killer as part of the Global Magnitsky Act, which allows the US to sanction foreign governments for human rights abuses.

Trump's refusal comes just one day after The New York Times, citing former and current intelligence officials, reported that bin Salman told a top aide in September 2017 he would use "a bullet" on Khashoggi if he did not return to the kingdom and stop criticizing the Saudi government.

In October 2018, Khashoggi was assassinated by Saudi agents at a Saudi consulate in Turkey before his body was dismembered, according to Saudi prosecutors. Saudi Arabia has acknowledged the killing was premeditated and carried out by members of bin Salman's inner circle but insists the Crown Prince had no role.

The Trump administration has persisted in defending MBS, even as Republican senators have said there is "no question" bin Salman ordered Khashoggi's killing.

Trump grew close to MBS early in his term and visited Riyadh on his first foreign trip. Jared Kushner, the President's son-in-law and adviser, even counseled the Crown Prince on how to weather the storm after Khashoggi's death, according to officials who spoke to The Times. The Trump administration has only acknowledged one conversation between Kushner and MBS after Khashoggi's death, during which Kushner, along with National Security Adviser John Bolton, "asked for more details and for the Saudi government to be transparent in the investigation process," the White House said.

It's not just a personal relationship -- Trump has policy reasons for supporting the Saudi monarch. The administration is aligning with Saudi Arabia on a number of issues, the most significant of which involves pushing against Iran's regional role. It also views Saudi support as crucial for Kushner's expected Israeli-Palestinian peace plan.

Trump is not the first president to overlook the atrocities of a dictator for geopolitical reasons. Franklin Roosevelt famously defended an invitation to a Nicaraguan dictator by saying, "He may be a son of a b----, but he's our son of a b----."  Many presidents have looked away from troubling allies as they brazenly violated America's lofty ideals. But Trump is the first in recent memory to seem at ease with mafia tactics. Murder and dismemberment add a far more gruesome twist, but the mob-like approach is nothing new, given Trump associates who have been making the news with gangster-style threats. Threats and intimidation appear to be a feature of the Trump world, not an exception.

Americans may be used to shocking news by now, but it was still stunning when Jeff Bezos claimed the National Enquirer -- a close ally of Donald Trump -- committed "extortion and blackmail."

Bezos, the world's wealthiest man, owns The Washington Post, where Khashoggi was a columnist. And in his Medium post on Thursday, Bezos suggested this entire scandal kicked off due to his own investigation into how and why the Enquirer published intimate texts he sent to a woman who is not his wife.

Bezos' investigation may have touched on Saudi Arabia, which apparently prompted a reaction from David Pecker, CEO of the Enquirer's parent company, American Media Inc. "Several days ago," Bezos wrote, "an AMI leader advised us that Mr. Pecker is 'apoplectic' about our investigation. For reasons still to be better understood, the Saudi angle seems to hit a particularly sensitive nerve."

A few days later, AMI warned Bezos that it would publish more embarrassing texts and photos if his investigation did not come to a halt. In another email, an AMI lawyer wrote that if Bezos issued a public statement saying he found no reason to believe the Enquirer's coverage "was politically motivated or influenced by political forces," AMI would agree not to publish the damaging material.

AMI issued a statement on Friday saying it "acted lawfully" in its reporting about Bezos' affair. The company also announced it would launch an investigation into the claims.

While Pecker was not the one who sent the emails Bezos shared on Medium, the company has come under fire for questionable practices in the past -- including Pecker's work with ex-Trump fixer Michael Cohen to suppress former Playboy model Karen McDougal's story about Trump during the presidential campaign.

It was foolish of the Enquirer to take on the world's richest man and downright stupid to allegedly blackmail him. The story was shocking but curiously unsurprising. After all, the tactic has a familiar ring. We've heard about mafia techniques by Trump defenders many times.

And mafia lingo seems to roll off the President's tongue. In one instance, he called Cohen a "rat" for agreeing to cooperate with special counsel Robert Mueller's investigation. Then, Trump tweeted, "Watch father-in law!" in what sounded like a Cosa Nostra-inspired threat against Cohen's family. Cohen later postponed his congressional testimony due to "ongoing threats" against his family, "from President Trump and (Rudolph) Giuliani," his lawyer said.

During his days in Trump's employ, Cohen too had a gangster's verbal touch defending his boss. "I'm warning you, tread very f---ing lightly," he told a reporter, "because what I'm going to do to you is going to be f---ing disgusting."

Roger Stone is another shady character who has long orbited around Trump. Stone, who has been described as a "quality guy" by the President, has also fired off mob lexicon. "You are a rat. A stoolie ... run your mouth my lawyers are dying to Rip you to shreds," he wrote in one email cited in his indictment. Stone also told an associate to "do a Frank Pentangeli" -- a reference to the Godfather character who recants his testimony against his boss and kills himself.

This solar system of dubious characters circling the President has become another unseemly trait in an administration stained by conflicts of interests and assaults on norms of decency.

That backdrop magnifies the cringe factor in Trump's defense of the Saudis.

We don't know precisely what Bezos found in his investigation and what he meant by the "Saudi angle" that apparently alarmed Pecker. A Saudi envoy said the kingdom was not involved in the dispute between Bezos and AMI. Regardless, AMI's actions echo both the tone and tactics of the underworld feel of the Trump administration. That alone suggests we're nowhere near the end of this story.

Christmas by the Lake returns to Clear Lake this weekend

Contact tracing revs up in some states as omicron reaches US

Car/van crash on Broadway Avenue sends driver to the hospital

Shop with a Cop