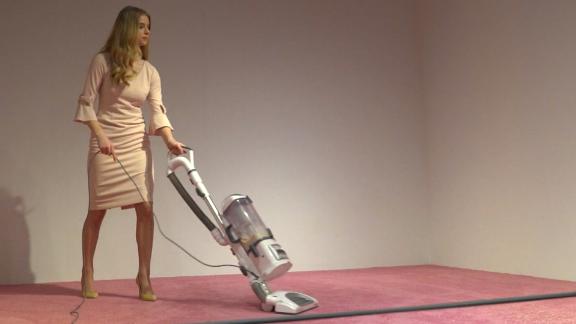 One unfortunate consequence of Donald Trump's presidency is the increased role of out-of-touch millionaires in public discourse. It's not just the President and his family, but also the army of corporate executives and lawyers and lobbyists around him.

But while Americans may not be used to so much blatant plutocratic elitism, the art world is. In this field, small numbers of wealthy people determine most of what gets seen and talked about. Wealthy museum board members underwrite frivolous exhibitions, the press follows the money, nepotism runs rampant.

The artist Jennifer Rubell is immersed in that world, as an established star and the daughter of mega-collectors Mera and Don Rubell. In theory, who better to take on Ivanka Trump, in a performance art piece now on view in Washington?

Rubell, who is best known for producing art installations made up of vast piles of food, now gives us "Ivanka Vacuuming," through February 17 at CulturalDC's mobile art gallery. A look-alike of the President's daughter, in a pink tube dress in stiletto heels, vacuums up crumbs from a fuchsia carpet. As she works, viewers are invited to throw more crumbs at her feet, which they can collect from a nearby mountain of crumbs.

Ivanka Trump, apparently feeling attacked, responded to the piece on Twitter: "Women can choose to knock each other down or build each other up. I choose the latter."

Trump has a thin record of choosing the latter, which contributes to the interpretation of the piece. The self-proclaimed women's advocate supported the nomination of Brett Kavanaugh -- accused of sexual misconduct -- to the Supreme Court, according to a report in Vanity Fair that quoted two people familiar with the situation ahead of his confirmation. She campaigned for anti-abortion extremist Kim Reynolds for governor of Ohio, and provided her father cover after he told CNN that former Fox News host Megyn Kelly had "blood coming out of her eyes." Like other Trumps, Ivanka defines what benefits her family as what's good for women.

What's left, under her father's administration, isn't even crumbs.

(Rubell responded to Trump's tweet by inviting her to the exhibition for herself. "I would be happy to arrange for you to do it alone with none of the media circus that has formed around it," Rubell wrote. "Not knocking anyone down. Exploring complicated subjects we all care about.")

So how are we meant to interpret this art? Perhaps the Ivanka look-alike is sucking up the rights and freedoms that women have won with her vacuum, an appliance intended to allude to the domestic role women are expected to perform. And every time we throw crumbs at Ivanka's feet, we slowly erode those privileges.

Well, sort of. The pile of crumbs never recedes, so if there's a consequence for participating, the viewer never experiences it. Moreover, the metaphor doesn't quite work -- a massive pile of crumbs is worthless whereas a mountain of incremental, and actual, progress is not.

Art doesn't need to serve up fixed meaning, but in combination with other more trite aspects of the work, the piece falls apart. The obvious symbolism that the color pink and a vacuum equals women, for example, prompts derision, not intellectual curiosity.

In truth, Rubell's "Ivanka Vacuuming" is a simple-minded concept that works best at art fairs and on Instagram, where attention spans are short, and left-leaning art lovers are likely to forgive such faults for messages they like. As a member of this community, I'm not immune to this, even though I know it's bad art.

Rubell, who explains in the press release that viewers enjoy tormenting the performer, tacitly acknowledges that the piece isn't much different than a dunk tank. "It makes us feel powerful, and we want to do it more," she says of the work, as if she were conducting an ethnographic study of the American psyche. A more charitable reading of the carnival-attraction of a piece might argue that it alludes to how woman are made examples of and victimized more than their male counterparts. But this seems a stretch.

While the political message prevents me from wholly disavowing the piece, I don't trust it either. Beyond the spectacle the art traffics in, there's a whiff of hypocrisy to the project that I can't quite shake.

Jennifer Rubell isn't using her economic privilege to fight gender inequity; she's using it to sell art that critiques other wealthy women for not doing that either. It's a kind of armchair moralizing we've become increasingly used to seeing from millionaires over the last two years, and one deserving of far fewer platforms.