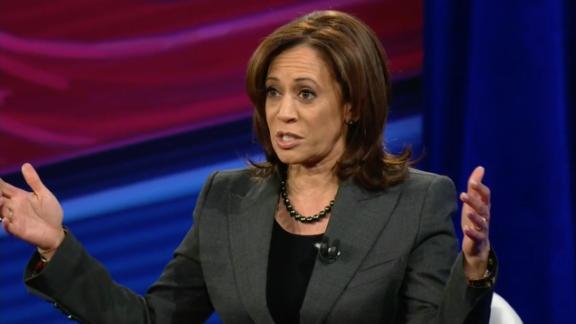 During a CNN town hall in Iowa, when Democratic presidential contender Sen. Kamala Harris was asked how she will stay on message in a debate with President Donald Trump, she stated she will "speak like a leader" rather than "inciting fear."

Kamala Harris has a theory of the case about the Democratic presidential nominating process. If she's right, she could well be standing on a debate platform with Donald Trump in 2020.

Plainly, her announcement and effective rollout on Martin Luther King Jr. Day wasn't a casual scheduling decision. Nor was her decision to visit South Carolina even before her highly produced kickoff rally Sunday in Oakland, California.

While not explicitly capitalizing on her status as the only woman of color in the race, the symbolic timing of her declaration and the nature of these events were impossible to ignore.

Too little attention has been paid to the way the nominating process unfolds, first in mostly white Iowa and New Hampshire but then moving quickly to more diverse states where African-Americans play a much larger role.

Hillary Clinton was able to shake off Bernie Sanders in 2016 primarily because of her advantage among black voters. That same edge helped Barack Obama prevail over Clinton in 2008.

African-American voters are a strong part of the Democratic base. And under party rules, congressional districts with overwhelming Democratic performance receive additional delegates, multiplying the value of black support.

Harris' challenge is to be a top finisher in the early states that traditionally narrow the field, to get to those contests that start with the crucial South Carolina primary, where she may have a decided advantage. She'll be in Iowa tonight for a CNN Town Hall hosted by Jake Tapper. (It airs at 10 pm on CNN.)

There are many reasons to believe Harris could break through.

The daughter of Jamaican and Indian immigrants, an economist and a medical researcher, she is a smart, charismatic and contemporary candidate with broad and diverse appeal.

The power of women on the ballot was manifest in 2018.

In a race that may require more than $100 million just to do well in the early states, Harris has a solid fundraising base in California and through social media. She raised an impressive $1.5 million online in just the first 24 hours after announcing her candidacy.

Her California supporters have built in an additional advantage, moving the date of the state's presidential primary from June to March, with early voting beginning the day of the Iowa caucuses. The nation's largest state will send 11 percent of the delegates to next year's Democratic National Convention.

Harris' profile, as a potentially barrier-breaking candidate, has drawn comparisons to another first-term senator who went on to win the presidency. But glib comparisons to Obama mostly miss the mark.

Blessed with prodigious political skills still unproven in Harris, Obama stood apart from all the Washington-based candidates as an early opponent of the war in Iraq. His distinctive message was a clear challenge to both parties and the conventional, divisive small-bore politics that many Americans felt had failed the country.

Though born in Hawaii, Obama was rooted in the middle of the country. His home and political base was Illinois. His family's ties to Kansas were woven into the fabric of his story. In the small towns and rural communities of Iowa, he felt very much at home.

Harris' base is the Bay Area, not a natural fit for the heartland. California campaigns, which play out mostly on TV, are not the best training for the intimate campaigning required in the early primary states.

Voters there expect genuine interaction, which is why some locals may view it as a bit peculiar that Harris' first major candidate event in Iowa is a nationally televised town hall. (The campaign added a stop in anticipation of that blowback.)

Harris and the cavalcade of Democratic contenders will learn that voters judge on a different scale in a presidential race than any other. They want to know who you truly are, and punish the cautious or unrevealing. This, too, could pose a challenge for the sometimes guarded Californian.

There are other dynamic women in the race, and it very likely will include another prominent candidate of color, US Sen. Cory Booker of New Jersey.

If Beto O'Rourke runs, the former Texas congressman would enter with a galvanized following among the young. Former Vice President Joe Biden would begin as the front-runner.

The best campaigns are tactically sound and strategically clear. They share a coherent and compelling narrative about the candidate, campaign and the country.

Harris' nascent message lacks the crystal clarity of, say, US Sen. Elizabeth Warren's. Why is Harris running? What is her vision for a rapidly changing world? Her announcement speech was powerfully delivered but laden with anodyne Democratic applause lines any candidate might offer.

Her provocative slogan, "Kamala Harris, For the People," derives from her career as a state and local prosecutor and speaks to her toughness and advocacy. But her record is a double-edged sword, providing potential fodder for opponents in an era and a party in which criminal justice reform has emerged as a central issue.

Still, Harris brings enormous assets to the race that make her an instant top-tier candidate.

She is not the first woman of color to run for President. Her campaign logo is an homage to Shirley Chisholm, the late Brooklyn congresswoman, who broke that ground with a symbolic campaign in 1972.

But nearly a half century later, Harris is the first woman of color with a legitimate chance to win.

Kobe Bryant and his daughter, Gianna, among 9 killed in a helicopter crash in California

Dense Fog Advisory for some through Monday a.m.

Celebrating the Chinese New Year with a tea party

Hitting the slopes with the Rochester Nordic Ski team