Pete Davidson jokes about his suicide threat in 'SNL' return 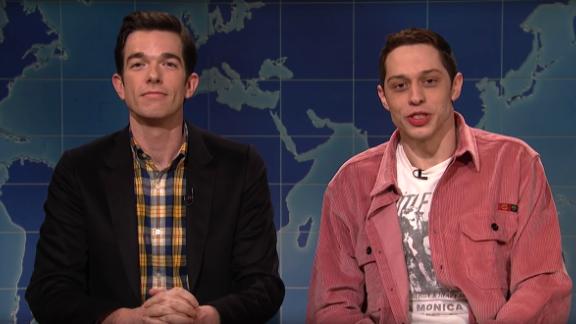 The segment focused on Davidson and comedian John Mulaney mocking the absurdity of the Clint Eastwood movie "The Mule."

"I've been spending time with Pete to try to show him you can have a life in comedy that is not insane. A sober, domestic life," Mulaney said.

"Yeah and after observing John's life, I publicly threatened suicide," Davidson said. "I'm sorry I know I shouldn't make that joke, but it is funny."

The sketch comes weeks after Davidson posted an alarming note on Instagram saying "I really don't want to be on this earth anymore" and then deleted his account. NYPD officers conducted a wellness check on Davidson in person on December 15.

That night, he appeared on the show to introduce a live musical performance. Saturday's episode was the first time he addressed the incident on "SNL."

His segment largely functioned as a head-fake to discuss the new movie "The Mule." It began as host Colin Jost introduced Davidson to "talk about a very important experience he had over the holidays."

"How are you Pete?" Jost said.

"I'm great. As you know I've had a really crazy month, and I want to talk about something that matters a lot to me," Davidson said.

"No, the new Clint Eastwood movie, 'The Mule,'" Davidson responded.

Davidson, who has been diagnosed with borderline personality disorder, has been vocal about his mental health struggles and about the harassment he's faced since breaking off an engagement with pop star Ariana Grande in October.

He also was criticized on the November 3 show for mocking the appearance of Dan Crenshaw, a congressional candidate from Texas who lost his eye while serving in Afghanistan. One week later, Crenshaw appeared on the show and received an apology from Davidson.

On this Saturday's episode, Davidson appeared in several other segments as well, including "Millennial Millions" and "Earthquake News Report."

Winter Weather Advisory in effect: A breakdown by county

StormTeam 3: Winter storm to make for a messy Monday

An Out of this World Engineering Contest