Comedian with cerebral palsy is standing up to stereotypes 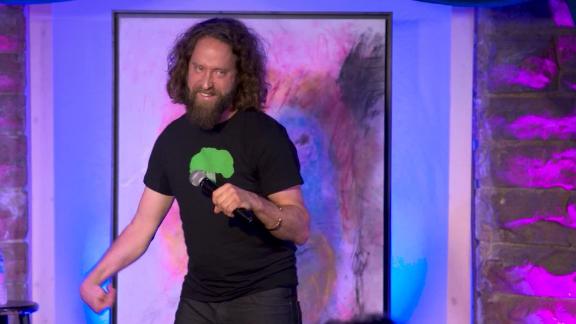 Josh Blue is a comedian who just happens to have cerebral palsy. He's using his comedy and humor to help breakdown stereotypes of those with disabilities.

He left them in stitches on "The Tonight Show Starring Jimmy Fallon" and "The Ellen DeGeneres Show." He's headlined stand-up specials on Showtime and Comedy Central. He even won a season of NBC's "Last Comic Standing."

But Josh Blue is used to people staring at him on the street for a different reason. Blue has cerebral palsy, a brain defect that has limited the use of his left hand and affects some of his motor skills.

"The way my body works, people are always going to stare at me. It's just human nature."

He decided that if people were going to stare, he was going to give them a better reason than his disability. He started attending open mic nights in college and quickly realized that he not only had the gift of being able to make people laugh, he had a unique perspective.

"As a disabled person, I feel like a lot of times we don't get to be heard. When I'm up there, you have no choice but to hear me. My show is not all about the cerebral palsy, but it definitely comes from that point of view. I tried to do my show from a Southern belle point of view, but that didn't work quite right."

The Minnesota native has performed more than 2,000 shows and toured the world. He estimates that he performs 200 shows a year and just wrapped production on his fifth stand-up special.

That's an impressive feat for many comics, but Blue, who just turned 40, doesn't have any plans to slow down soon.

"People have preconceived ideas about disability. When people tell me that I can't do something, it just makes me go 'Oh, yeah? Watch this.' I kind of like a little adversity."

With every show, Blue goes out with one main goal: leave the audience sore from laughter. He's a comedian first and foremost, just one who "happens to have cerebral palsy."

But Blue wants his comedy to bring more than just smiles to the audience. He hopes to bring disabilities more into the limelight. Just don't call him "inspirational."

"I feel like when you call me inspirational, it takes away from the success that I've actually had. Would you say that to any other comic that just ripped the mic for an hour? When you leave my show, you leave with a different perspective of disability."

And Blue specializes in self-deprecating humor, so if you're on the sensitive side -- be warned. As his website says, he's "the comedian who puts cerebral in cerebral palsy."

"The thing about my comedy is that I'm so comfortable with my disability that you don't have a right to be uncomfortable," said Blue. "If I say something that's hard in my life but put it in a way that maybe you have not thought of, and I'm laughing at it, it gives you the ability to laugh at the same thing within yourself. I feel like every person has a disability in some way. Whether you're dyslexic or Republican or whatever."