Trump makes economic pitch in State of the Union address 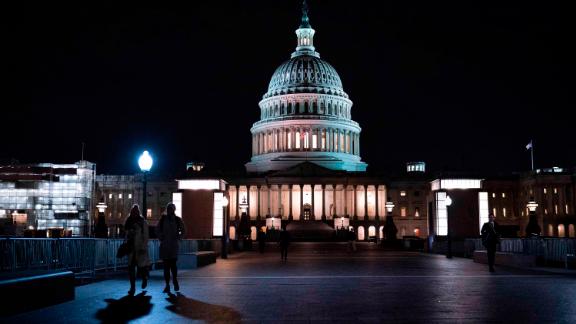 Times change, but issues remain. These four themes have emerged during modern State of the Union addresses, no matter the President's party or the year. They each have had their own solutions, but the issues have remained largely unchanged.

With the Senate on the verge of an impeachment vote expected to keep him in office, President Donald Trump used Tuesday's State of the Union address to implore Americans to do the same.

The timing of the annual speech -- sandwiched on a day between the chaotic Iowa kickoff of Democrats' presidential nominating contest and the expected conclusion in acquittal of a five-month impeachment saga -- imbued the 2020 version with drama often missing from the annual ritual.

From the start, the specter of impeachment loomed. When House Speaker Nancy Pelosi -- with whom Trump hasn't spoken in months as she oversaw the impeachment proceedings -- extended her hand to greet the President, he left her hanging. She smiled broadly as she glanced toward her Democratic caucus and shrugged.

Trump's speech, which aides insisted would bypass mention of the impeachment drama, instead touted economic achievements that Trump claims have restored the nation's standing.

"Three years ago, we launched the Great American Comeback. Tonight, I stand before you to share the incredible results," said at the start of his address.

"In just three short years, we have shattered the mentality of American Decline and we have rejected the downsizing of America's destiny," said, using the national address to again undermine his predecessor, under whom the US economy began its recovery after the 2008 financial crisis. "We are moving forward at a pace that was unimaginable just a short time ago, and we are never, ever going back!"

Trump was speaking from the very chamber where he was impeached by the House late last year, addressing a Congress that remains bitterly divided over whether he committed high crimes and misdemeanors in his effort to pressure Ukraine into investigating a political rival.

Trump's aides insisted his speech would be forward-looking and optimistic, despite the deep grievances he fosters over being impeached.

"The vision I will lay out this evening demonstrates how we are building the world's most prosperous and inclusive society -- one where every citizen can join in America's unparalleled success, and where every community can take part in America's extraordinary rise," Trump will say, according to the excerpts.

The White House orchestrated one surprise for the evening: inviting Venezuelan opposition leader Juan Guaidó, who is recognized as the nation's legitimate head by the United States and more than 50 countries.

His presence could allow Trump to deliver a sharp rebuke of socialism, not just in Venezuela but in aspects of the Democratic Party. It's a theme he's returned to repeatedly, particularly as democratic socialist Sen. Bernie Sanders rises in primary polls.

Trump's Republican allies have encouraged him to steer clear of the divisive impeachment in his speech. And Trump himself insisted during a weekend interview he wasn't considering moving the speech to a less auspicious date.

"I've read through the speech and I've not seen the word impeachment," White House spokesman Hogan Gidley told reporters at the White House on Tuesday afternoon.

Still, the topic could arise in some manner, according to one official, though won't be the main focus of his address.

"As he likes to say, we'll see what happens," Gidley said.

Instead, Trump will seek to highlight a strong American economy, defeats of American enemies abroad and his plans on health care and infrastructure -- all making the case for his reelection in November.

A meltdown in reporting the results of Monday's Iowa Democratic caucuses deprived any one candidate of a momentum jolt heading into Tuesday.

Earlier Tuesday, a Gallup poll showed Trump reaching the best numbers of his presidency, with 49% of respondents approving of his job performance and 50% disapproving.

The theme of the speech is the "Great American Comeback," according to administration officials, with specific focus on areas like a "blue collar boom," lowering health costs and immigration.

According to the excerpts of the speech, Trump will tout new trade deals with China and other North American countries; his newly formed Space Force military branch; and tough border security positions.

He will also make dubious claims like a commitment to protect health insurance for Americans with pre-existing conditions. Though Trump says he would do this, his administration has consistently taken steps to undermine the Affordable Care Act -- including joining a lawsuit aimed at striking down the law -- without presenting alternative plans that would offer similar benefits.

Trump hopes to convince one of the year's biggest television audiences that his ideas and record warrant another four-year term, despite having been only the third president in US history to be impeached.

Trump and his aides once hoped to use the speech as a victory lap of sorts following an acquittal vote. But a procedural compromise extended the trial into another week and now a final vote on the two impeachment articles won't come until Wednesday afternoon.

While he won't be the first to address Congress mid-trial -- President Bill Clinton delivered his 1999 State of the Union just as arguments were getting underway -- Trump will be the first president to be impeached before facing voters, lending an unpredictability to the coming campaign. The themes he lays out on Tuesday are expected to form the core of his message in the coming 10 months.

"We've done a lot, and we've achieved a lot -- as much or more than anybody over the first three years -- and we're really looking to giving a very, very positive message," Trump told reporters Sunday at his West Palm Beach, Florida, golf club, where he was hosting a Super Bowl party.

He spent part of the weekend preparing for the speech, which a team of speechwriters has been drafting for months. Typically, White House aides solicit recommendations from across the administration for ideas to include in the speech.

Trump has offered his own themes and specific lines that will be included in Tuesday night's address, often scrawling them out in Sharpie on pieces of paper that are then delivered to his writing team. He's expected to rehearse his delivery from the White House basement earlier in the day.

It's Trump's third State of the Union speech and his fourth address to a joint session of Congress. He's stuck mostly to script during his past speeches.

The White House has announced a roster of guests meant to underscore Trump's message: a former addict who has benefited from one of the administration's "opportunity zone" job training programs; the deputy chief of the US Border Patrol; a fourth-grade student and her mother from Pennsylvania who the White House says were negatively affected by legislation in the state; a mother and son whose father was killed by a roadside bomb the White House says was supplied by slain Iranian commander Qasem Soleimani; and a former police chief in Venezuela who was imprisoned for years in the country before escaping to Florida.

Aides have acknowledged that last minute changes to the text -- including possible references to the impeachment -- are always possible. Trump and his team of advisers often revise his speeches up until the moment of delivery.

"It wouldn't be out of the ordinary for the speech to evolve before it's delivered," an official said.

In the days leading up to the speech, Trump flashed anger at Democrats for impeaching him, downplaying the prospects he'd be able to work across the aisle in the year ahead.

"It's pretty hard when you think about it," Trump told Fox News. "I'm not sure that they can do it, to be honest. I think they just want to win. And it doesn't matter how they win."

Republicans in Congress -- who will comprise Trump's audience on Tuesday along with Democrats, members of the Cabinet, Supreme Court justices and foreign ambassadors -- have hoped for a speech that avoids mention of impeachment, even if they aren't entirely confident it won't.

"If I were him I'd avoid that subject. There's plenty to talk about and it's time to move on," said Sen. Roy Blunt, a Republican from Missouri. "But the other option is to address it head-on and he often is a head-on kind of guy."

"It's just not what I would do. But Donald Trump's Donald Trump. He's the only Donald Trump we know, and I suspect he'll be himself," said Sen. Kevin Cramer of North Dakota.

"I mean, I wouldn't," said Sen. Marco Rubio, before acknowledging: "It's his State of the Union."

Hi: 73° Lo: 51°
Feels Like: 61°
More Weather
Lingering showers Thursday AM will turn to sunshine by the afternoon

Iowa authorities investigating who set a box of kittens on fire

AP: Officer accused of Minneapolis killing fired on two people during his career

Giving Back To Essential Workers